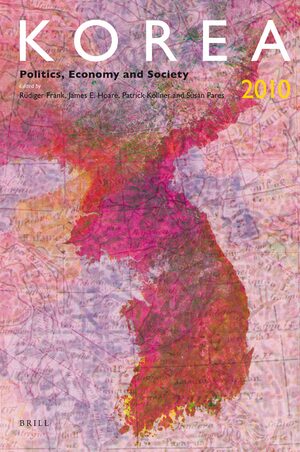 Volume Editors: Rüdiger Frank, Jim Hoare, Patrick Köllner, and Susan Pares
Korea 2010: Politics, Economy and Society contains concise overview articles covering domestic developments and the economy in both South and North Korea as well as inter-Korean relations and foreign relations of the two Koreas in 2009. A detailed chronology complements these articles. South Korea-related refereed articles in the 2010 edition of the yearbook deal with the restoration of the Ch'ōnggyech'ōn River in Seoul, the role of think tanks in the discourse on East Asia, the economic policy response to the global financial crisis, the 'green growth' policy of the Lee Myung-bak government, economic relations with India, and the 'Manchurian western' genre in South Korean cinema. Additional refereed articles provide a meta-analysis of North Korean migration to China and South Korea and illuminate representations of the Korean War in North and South Korean children's literature.
E-Book (PDF)

€73.00$91.00
​
Add to Cart
Rüdiger Frank, Ph.D. (2001) in Economics, University of Duisburg, is Professor of East Asian Economy and Society at the University of Vienna. He has published on North and South Korean political economy. His current research is on North Korea's development and its East Asian context.
James E. Hoare, Ph.D. (1971) in Far Eastern History, University of London, was in the British Diplomatic Service from 1969 to 2003. He is a writer and broadcaster on East Asia as well as a Research Associate at both the School of Oriental and African Studies (SOAS), London and the Department of International Politics, University of Wales, Aberystwyth.
Patrick Köllner, Ph.D. (1998), Humboldt University of Berlin and Habilitation (2005), University of Trier in Political Science is currently Acting Director of the Institute of Asian Studies, GIGA German Institute of Global and Area Studies, Hamburg. From 1996 to 2006 he edited the German-language edition of the Korea Yearbook.
Susan Pares, was in the British Diplomatic Service from 1965 to 1987. She is a writer and editor on East Asian affairs.

… the chapters in this volume are commendable for drawing attention to issues that, while important, do not normally merit space in English-speaking volumes on South Korea."
Ramon Pacheco Pardo, King’s College London, UK, International Affairs 88: 2, 2012
Preface

South Korea in 2009: Domestic Developments and the Economy- Patrick Köllner

North Korea in 2009: Domestic Developments and the Economy - Rüdiger Frank

Relations Between the Two Koreas in 2009 - Sabine Burghart and James E. Hoare

Foreign Relations of the Two Koreas in 2009 - James E. Hoare

Conflict Management in Urban Planning: The Restoration of the Cheonggyecheon River in Seoul -
Annette Erpenstein

On the Trail of the Manchurian Western - Mark Morris

“War and Art: The Korean War in North and South Korean Illustrated Children’s Books” - Dafna Zur
All those interested in contemporary Korea, including academics and students in Korean studies, Asian studies, and the social sciences, but also business people, diplomats and other officials, and NGO representatives.