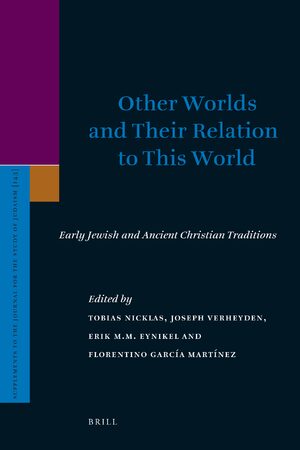 Other Worlds and Their Relation to This World

Editors: Tobias Nicklas, Joseph Verheyden, Erik M.M. Eynikel and Florentino Garcia Martinez
Is there a future after death and what does this future look like? What kind of life can we expect, and in what kind of world? Is there another, hopefully better world than the one we live in? The articles collected in this volume, all written by leading experts in the field, deal with the question how ancient Jewish and Christian authors describe “otherworldly places and situations”. They investigate why various forms of texts were created to address the questions above, how these texts functioned, and how they have to be understood.
It is shown how ancient descriptions of the “otherworld” are taking over and reworking existing motifs, forms and genres, but also that they mirror concrete problems, ideas, experiences, and questions of their authors and the first readers.

€162.00$202.00
​
Add to Cart
Tobias Nicklas, Dr. theol. (2000), Habilitation (2004), is currently Professor of New Testament Studies at the University of Regensburg, Germany. He has published extensively on Jewish and Christian apocrypha, New Testament Textual Criticism and questions of Jewish-Christian Dialogue.

Joseph Verheyden, Dr. Theol. (1987), is Professor of New Testament at the Catholic University of Louvain. He has published in the field of synoptic studies, textual criticism, intertestamental and apocryphal literature, and the early reception history of the New Testament.

Erik Eynikel Th.D. (1989), Katholieke Universiteit Leuven, is Lecturer of Old Testament exegesis at the University of Nijmegen and Adjunct Professor for Old Testament at the University of Dallas. He has published extensively on the Deuteronomistic History and the Septuagint, including The Reform of King Josiah and the Composition of the Deuteronomistic History (Brill, 1996) and together with J. Lust and K. Hauspie, A Greek English Lexicon of the Septuagint (DBG, 2003).