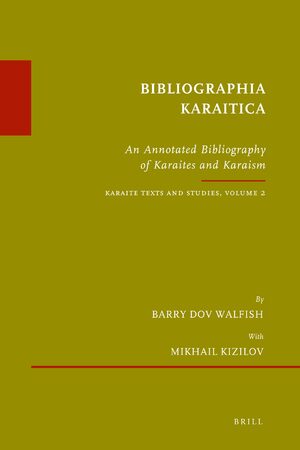 An Annotated Bibliography of Karaites and Karaism. Karaite Texts and Studies, Volume 2

This is the first comprehensive bibliography on the Karaites and Karaism. Including over 8,000 items in twenty languages, this bibliography, with its extensive annotations, thoroughly documents the present state of Karaite Studies and provides a solid foundation for future research. Special attention has been given to the organizational structure of the bibliography. A detailed table of contents and a complete set of indices enable the reader to easily navigate through the material. Translations of items from non-Western languages increase the bibliography’s utility for the English-speaking reader. Especially noteworthy are the listings of obscure eastern European publications and the analysis of many periodical publications which enable unprecedented access to this material. It is an essential reference tool for Karaite and Jewish Studies.

˝This is an essential guide to any serious study of Karaism or of medieval (and to a large extent, also modern) Jewry.˝
Shaul Stampfer, Hebrew University of Jerusalem

" Bibliographia Karaitica is a major reference work that will remain of great use for Jewish studies scholars working in many areas of specialization long into the future."
Fred Astren, San Francisco State University
E-Book (PDF)

Mikhail Kizilov, D.Phil (2007) in Modern History, University of Oxford, is a Kreitmann Fellow at Ben Gurion University of the Negev (Beer Sheva). He has more than 60 publications on Karaite, Crimean, Khazar, and Jewish history in the English, Russian, German, and Hebrew languages including The Karaites Through the Travelers' Eyes (New York, 2003).

Essential for academic libraries and individual scholars with an interest in Karaism, Jewish Studies, Sectarianism, including historians, historians of religion, philologists, biblical scholars, halakhists, and philosophers.