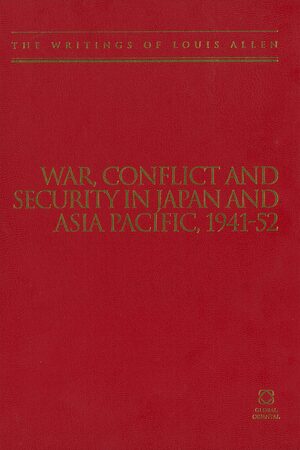 The Writings of Louis Allen

Author: Louis Allen
It was Louis Allen’s work on Japan which dominated his prodigious output as a scholar, researcher and writer and which received greatest attention internationally. This collection of his writings focuses entirely on his principal fields of research, viz, Japan and the Pacific War, the post-war conflicts in Burma, Malaya and Indochina, and the immediate post-war years in the context of Japan, security and reconciliation. Importantly, in addition to the 24 essays brought together here from both known and unknown sources, we are pleased to publish for the first time Louis Allen’s own undated autobiographical paper entitled ‘Innocents Abroad: Investigating War Crimes in South-East Asia’, providing a unique, first-hand account of his war-time life and activities. This volume also includes a complete bibliography of Louis Allen’s writings covering all disciplines.
E-Book (PDF)

€148.00$182.00
​
Add to Cart
Louis Allen (1922–1991) was Reader in the School of Modern Languages at the University of Durham (1961–91). He served during the war as a Japanese-speaking Intelligence officer in India and Burma, and after the war in Malaya, Thailand and French Indo-China (Vietnam). His books include Sittang (1973), Singapore 1941–42 and Burma: The Lonest War (1984).
" War, Conflict and Security in Japan and Asia-Pacific, 1941-52: The Writings of Louis Allen, edited by Ian Nish and Mark Allen, is a collection full of fascination and interest. The volume draws together, as separate chapters, 24 of Allen's articles and papers, some previously unpublished, and adds substantially to his several books. Its focus is history broadly defined.
Readers of Allen will be familiar with the grace and fluidity of his style, a sharp appreciation of detail and clarity of argument. However, probably few, even of those studying the Asia-Pacific war, will have read the majority of Allen's writings chosen by Nish and Allen (his son)..."
Gregg Huff, South East Asia Research, Vol. 19 No. 4 (December 2011)
Professional and scholarly