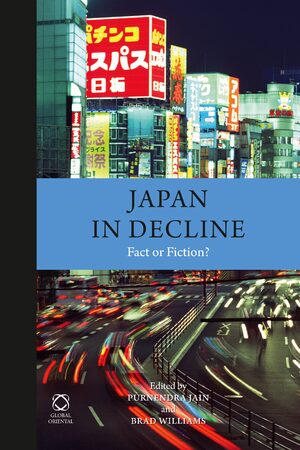 Editors: Purnendra Jain and Brad Williams
To what extent is Japan in decline? In recent years popular writings, media commentaries and analysts often take the view that the rise of Japan is long since over and that the world's second largest economy is not just treading water but that society and the economy are failing, with potential catastrophic outcomes. But is this really the case? Could it be that once again Japan is being misread and misinterpreted? Are there not both obvious and less obvious signs of renewal and recovery? And how might the new DPJ-led government reform Japan? Based on papers given at a major international conference held at the University of Adelaide in November 2009, this thesis is examined here by a group of the world's leading specialists in their fields, addressing many of the key issues facing Japan today, from the economy and environment, to education, social policy, politics, internationalization, diplomacy, security. This volume will have wide-ranging interdisciplinary relevance for students and specialists alike.
E-Book (PDF)

€54.00$67.00
​
Add to Cart
Purnendra Jain, PhD (1987), Griffith University, is Professor of Japanese Studies at the University of Adelaide in Australia. His research interests include politics and foreign policy of contemporary Japan and the international relations of the Asia Pacific. Author and editor of one dozen books and numerous scholarly articles, his forthcoming edited book with Takashi Inoguchi is Japanese Politics Today (New York: Palgrave Macmillan, 2011).