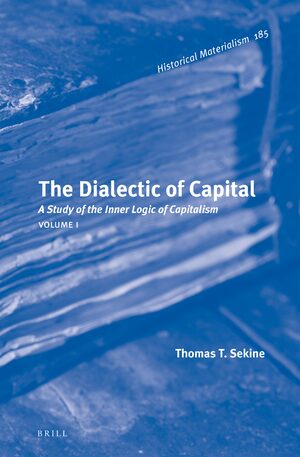 The Dialectic of Capital (2 vols.)

A Study of the Inner Logic of Capitalism

Author: Thomas Sekine
This is the first book written in English that tries to expose the “thing-in-itself (or inner logic)” of capitalism in a form homomorphic to Hegel’s Logic, following the method previously established in Japan by Kôzô Uno (1987-1977). Neither 'bourgeois-liberal' nor even 'conventionally-Marxist' economics possess a logical (hence objective) knowledge of capitalism as such, which is regrettable.

The manuscript of this book was completed in typescript at York University, Canada, in 1983, then privately published in that form by the author in about 500 copies, which are by now virtually dispersed. In order, however, to re-launch economics as objective knowledge, when the world must prepare itself to correctly terminate capitalism, we need to rediscover a book of this kind as a dependable guide.
E-Book (PDF)

€349.00$419.00
​
Add to Cart
Thomas T. Sekine, Ph.D. (1966), LSE, was Professor of Economics at York University, Ontario, Canada, 1968-1994, and Professor of International Trade, Graduate Faculty of Commerce, Aichi-Gakuin University, Nagoya, Japan, 1994-2005. He published monographs in economic theory, methodology of economics, international trade, etc. and translated two books of Kôzô Uno from Japanese into English, published his own books in both languages, e.g., An Outline of the Dialectic of Capital, 2 vols. Macmillan Press Ltd, 1997; Towards a Critique of Bourgeois Economics, Essays of Thomas T. Sekine, edited by John R. Bell, Owl of Minerva Press, Berlin, 2013; Towards a Paradigm Change in Economics (in Japanese), Tôshindô Press, 1995.
VOLUME 1

Introduction
A. Marxism, Ideology and Science
(a)Marxism as an Ideology
(b)The Three Elements of Marxist Knowledge
(c)The Problem of Social Science
B. The Significance of the Dialectic
(a)Hegel’s Dialectic
(b)The Rational Kernel of the Dialectic
(c)The Contradiction between Value and Use-value
C. Political Economy and Socialism
(a)The Scope of Political Economy
The Stage of Mercantilism
The Stage of Liberalism
The Stage of Imperialism
(b)The Fallacy of the Logical-historical Method
(c)From Capitalism to Socialism

P A R T 1: The Doctrine of Circulation (The Being of Capital): Introductory Remarks

P A R T I I: The Doctrine Of Production (The Essence of Capital)

4 The Production-process of Capital (Intro-Reflection)
Introduction
The Hegel Correspondence
A. The Labour-and-Production Process
(a)The Labour-process and the Production-process
(b)The Dual Nature of Productive Labour
(c)Surplus Labour and Necessary Labour
B. The Value-Formation-and-Augmentation Process
(a)The Labour Theory of Value
(b)The Viability of Capitalist Society
(c)The Necessity of the Law of Value
C. The Development of the Capitalist Method of Production: Labour-Power as a Commodity
(a)The Rate of Surplus Value
(b)The Modern Factory System
(c)The Form of Wages

P A R T I I I: THE DOCTRINE OF DISTRIBUTION (The Notion of Capital)


All scholars and students of economics, who have some doubt about the veracity and efficacy of its standard paradigms.