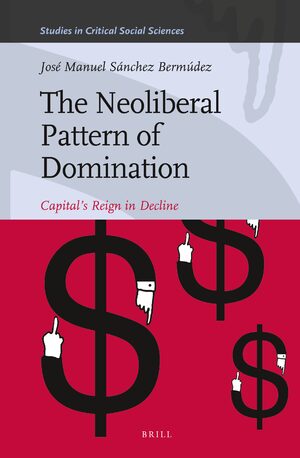 The Neoliberal Pattern of Domination

Author: José Manuel Sánchez Bermúdez
At its current state of historical development, capital finds its internal contradictions tending towards an irresolvable character as manifested in multiple crises. Embodied in a fistful of gigantic transnational companies whose representatives seek consolidation as a global oligarchy, capital continues to concentrate its economic, political and military power as it produces a growing mass of redundant human beings, promotes conflicts that result in misery, chaos, social degradation and death, and destroys entire societies while razing the natural environment, thereby putting humanity itself at risk. The defense of life and the construction of renewed hope for a future require opposition to the domination of capital. This book seeks to contribute to that effort by setting out an analysis of the mechanisms in which capital is based.
E-Book (PDF)

€153.00$190.00
​
Add to Cart
José Manuel Sánchez Bermúdez holds a Ph.D. in Political Science (Universidad de Zacatecas, 2008) and is Professor and assistant director for the Economy, State and Society program at the Universidad de Nayarit in Mexico. He has published numerous articles on globalization, neoliberalism and the structures of political domination.
The Neoliberal Pattern of Domination is a compelling, convincing and relevant historical account, both detailed and profound.
David Hollanders (Tilburg University), Comparative Sociology, Vol. 15, No. 1, 2016.
Foreword by R.A. Dello Buono
Introduction

Part Three – Conclusion
10. The Pattern of Domination and Historical Cycle of Capital

Bibliography
Index
All those interested in the domination of neoliberal capital over contemporary society, its theory and history, including economists, political scientists and concerned citizens.