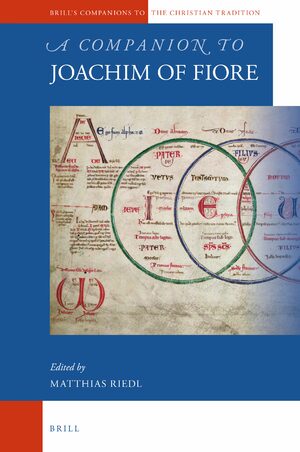 A Companion to Joachim of Fiore

Author: Matthias Riedl
Joachim of Fiore (c.1135-1202) remains one of the most fascinating and enigmatic figures of medieval Christianity. In his own time, he was an influential advisor to the mighty and powerful, widely respected for his prophetic exegesis and decoding of the apocalypse. In modern times, many thinkers, from Thomas Müntzer to Friedrich Engels, have hailed him as a prophet of progress and revolution. Even present-day theologians, philosophers and novelists were inspired by Joachim’s vision of a Third Age of the Holy Spirit.

However, at no time was Joachim an uncontroversial figure. Soon after his death, the church authorities became suspicious about the explosive potential of his theology, while more recently historians held him accountable for the fateful progressivism of Western Civilization.

€199.00$230.00
​
Add to Cart
Matthias Riedl, Dr. phil. (2003), University Erlangen-Nuremberg, is an associate professor at the Department of History at Central European University, Budapest. He published the monograph Joachim von Fiore: Denker der vollendeten Menschheit (2004) and numerous articles on the history of religious and political thought.
“ A Companion to Joachim of Fiore is a worthy addition to Brill’s [Companion] series and will serve its readers well for some time to come.”
Luke Penkett, The Julian Centre, Norwich. In: Journal of Religious History, Literature and Culture, Vol. 5, No. 1, pp. 158-160.


Acknowledgments Notes on Contributors Introduction: Joachim of Fiore in the History of Western Culture   Bernard McGinn 1 The Life and Works of Joachim of Fiore – An Overview   Alfredo Gatto 2 Joachim the Theologian: Trinitarian Speculation and Doctrinal Debate   Peter Gemeinhardt 3 Joachim the Theorist of History and Society   Brett Edward Whalen 4 Joachim the Abbot: Monastic Reform and the Foundation of the Florensian Order   Valeria De Fraja 5 Thomas Aquinas, Bonaventure, and the Critiques of Joachimist Topics from the Fourth Lateran Council to Dante   Sven Grosse 6 The Influence of Joachim in the 13th Century   Frances Andrews 7 Longing for the Third Age: Revolutionary Joachism, Communism, and National Socialism   Matthias Riedl 8 The Reception of Joachim in Contemporary Theology and Postmodern Philosophy   Massimo Iiritano Bibliography Index
All interested in apocalypticism, medieval theology, biblical exegesis, monasticism, and the theological roots of modernity; the volume provides introductory chapters for students as well as contributions to recent academic debates.