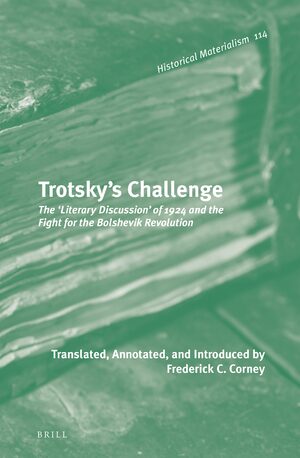 Author: Frederick Corney
In Trotsky’s Challenge: The ‘Literary Discussion’ of 1924 and the Fight for the Bolshevik Revolution, Frederick C. Corney examines the political polemic surrounding the publication of Trotsky’s The Lessons of October. Trotsky’s analysis ran counter to the efforts of Bolshevik leaders to fashion the narrative of October as a foundation event in which the Bolshevik Party, under the clear-sighted leadership of Lenin, played a major role in bringing about a radical socialist revolution in Russia. Corney has translated into English the major contributions to this polemic, annotated them, and written an extensive contextualising introduction, examining the polemic for its impact not only on the figure of Trotsky, but also on the changing political culture of the 1920s and 1930s.
E-Book

Introduction: Anatomy of a Polemic

Document 4: ‘The Komsomol and October (on Comrade Trotsky’s “The Lessons of October”)’ (12 November 1924), Central, Moscow, and Leningrad Committees of Komsomol

Document 6: ‘How Should the History of October be Approached? (Comrade Trotsky’s “The Lessons of October”)’ (19 November 1924), G. Sokol’nikov

Document 11: ‘Bolshevism or Trotskyism (Where the Trotskyist Line is Leading)’ (30 November 1924), G. Zinoviev

Document 16: ‘The October Revolution and the Tactics of Russian Communists’ (17 December 1924), I. Stalin

Document 21: ‘To All the Members of the Central Committee Who Are Enemies of Trotskyism’ (1924), N. Bukharin

Document 26: ‘Mistakes in “The Lessons of October” by Comrade Trotsky’ (January 1925), S.A. Piontkovskii

Appendix A: Introduction to ‘The Lessons of the Revolution’ (28 December 1924), Paul Levi

Appendix B: ‘The Lessons of the October Experiment’ (1925), Karl Kautsky

Index
All interested in the history of Marxism and Leninism, Russian Revolutionary history, early Soviet Russia, cultural history, and especially in the figure of Leon Trotsky and the early Bolshevik leaders.