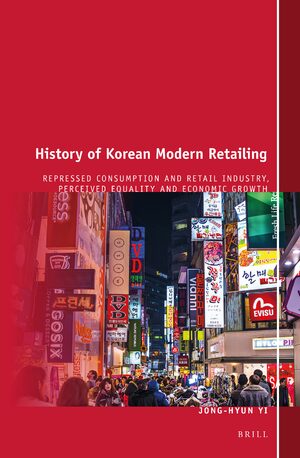 Author: Jong-Hyun Yi
In History of Korean Modern Retailing Jong-Hyun Yi shows how the Korean retail industry has developed since the 1970s, focusing on the relationship among government, consumers and retail companies, especially the department store. While generally it is said that underdevelopment of the Korean retail industry in the 1970s was attributed to economic immaturity, he argues it was artificially formed by strong consumption repression by the government. He also examines how consumption repression contributed to economic growth. Such initial condition in developmental period is a crucial factor to explain other distinctions like explosive growth and remarkably short heyday of the department store afterward.

€105.00$141.00
​
Add to Cart
Jong-Hyun Yi, Ph.D. (2009), London School of Economics and Political Science (LSE), is Professor of Business Administration at Gachon University. He has published some articles, including Historial Research on Emergence of Modern Business Enterprise in Korean Consumer Goods Industry (2012).
All interested in evolution of the retail format, particularly, development of retail sector in developing countries, and researchers for relationship between economic growth and equality or inequality, especially, for Korean economic growth.