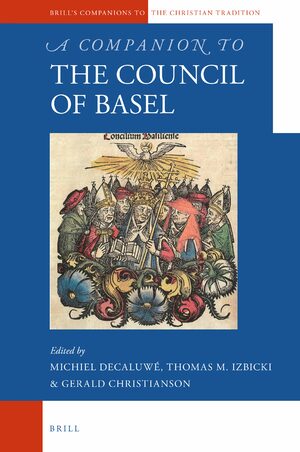 A Companion to the Council of Basel

Authors: Michiel Decaluwe, Thomas M. Izbicki and Gerald Christianson
The Council of Basel (1431-1449) met to defend the faith and reform the Church. Its efforts to deal with Hussite heresy and reform the Roman Curia led to conflict with Pope Eugenius IV (1431-1447). The council divided over the site of a council of union with the Eastern churches. Some left to attend Eugenius’ Council of Florence (1438-1443). While that council was negotiating reunion with Eastern churches, in 1439 Basel was acting to claim supremacy and depose Eugenius. The ensuing struggle went on for a decade before Basel and its pope, Felix V (Amadeus VIII of Savoy), gave up under pressure from the princes. These essays address multiple aspects of the Council of Basel, including its reforming efforts and bureaucracy.

€204.00$264.00
​
Add to Cart
Michiel Decaluwe received a doctorate in History from the University of Ghent. He is the author of A Successful Defeat: Eugene IV's Struggle with the Council of Basel for Ultimate Authority in the Church, 1431 – 1449 (Bruxelles, 2009).

Thomas M. Izbicki, Humanities Librarian Emeritus, Rutgers University, received his doctorate in medieval history from Cornell University in 1973. His publications include books on Pope Pius II, Nicholas of Cusa and Juan de Torquemada OP. His most recent book is The Eucharist in Medieval Canon Law (Cambridge, 2015).

Gerald Christianson is Professor Emeritus of Church History at Gettysburg Lutheran Seminary (USA) and a former president of the American Cusanus Society. He is the author of Cesarini, The Conciliar Cardinal (St. Ottilien, 1979) and articles on the Council of Basel.


Introduction: A Gathering of People and Ideas

The Official Records of the Council
Thomas M. Izbicki

Part 2. The Conflict between Council and Papacy

Conciliarism and the Council
Gerald Christianson

Part 3. The Issues at Basel

Lawyers and Legal Proceedings in the Council
Émilie Rosenblieh

The Hussites and the Council
Thomas A. Fudge

The Reforms of the Council
Birgit Studt

Negotiations between the Council and the Greeks
Ivan Mariano

France and the Council
Heribert Müller

The Empire and the Council
Johannes Helmrath

The Legacy of the Council
Alberto Cadili

The book is aimed at scholars in the fields of history and ecclesiastical history, including university faculty, graduate students, theological institutes and academic libraries.