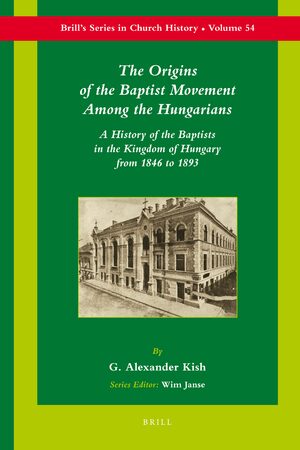 The Origins of the Baptist Movement Among the Hungarians

Author: George Alex Kish
This study of the origins of the Baptist movement among the Hungarians examines the two attempts to establish a sustained Baptist mission in the Kingdom of Hungary during the nineteenth century: the first unsuccessful attempt begun in 1846 and the second attempt begun in 1873, which resulted in a sustained Baptist presence in Hungary. The primary question the study addresses is why the first attempt came to naught while the second attempt quickly flourished. Related to this is the question of whether any organic connection exists between the two Baptist mission endeavors. In answering these questions interesting themes concerning the intersection of Christian mission, socio-political concerns, and cultural-linguistic tensions are addressed.
E-Book (PDF)


CHAPTER 1 On the Historiography of the Baptist Movement Among the Hungarians: An Introduction to a New Study of Hungarian Baptist Origins

CHAPTER 2 Pioneers and Pilgrims: The First Attempt to Establish a Baptist Movement in Hungary

From the Reform Period through the Revolution of 1848

Roots of the Hungarian Baptist Mission

The First Baptist Missionaries in Hungary: The Sending of Rottmayer, Scharschmidt,
and Woyka

The Baptist Missions in Pest and Pécs up to the Revolution

Johann Woyka and the Baptist Mission in Pécs

The Mission to Pécs and the Fate of Woyka

Progress suppressed: The work in Pest and the loss of the German brethren

The last man standing: Rottmayer and the Baptist mission in Pest under Neo-Absolutism, 1849-1866

From the Patent Fight to the Eve of Dualism: Rottmayer’s Renewed Cooperation with the Scottish Mission and the Baptisms of 1865

The End of Rottmayer’s Work in Pest

CHAPTER 3 The Hidden Years: The Later Work and Ministry of Johann Rottmayer and the Bible Colportage of Antal Novák

Rottmayer’s trip to Hamburg and re-marriage

The development of the Kolozsvár depot

Rottmayer’s Retirement and the Closure of the Depot

Why was no lasting Baptist mission planted at the first attempt?

CHAPTER 4 Wandering Apostles and Prophets: The Establishment of a Sustained Baptist Mission
in Hungary


The Impact of the Compromise on the Churches

Nationalism, Magyarization, and the Churches

The Churches in the Age of Liberalism

Liberal Protestantism, Confessional Orthodoxy, and the Rise of Evangelical Renewal

The Problem of the Sects: To the Protestant First?

The Renewal of the Baptist Mission in Hungary under Heinrich Meyer

The Internal Life of the Early Hungarian Baptist Movement

The Social Composition of the Baptist Movement

The Congregational Life of Hungarian Baptists

The Internal Organization of the Baptist Movement in Hungary

The Origins of the Magyar Mission

Persecution of the Baptists, Anti-Baptist Polemics, and Heinrich Meyer’s Struggle to Achieve State Recognition for the Baptists

The Importance of the Wesselényi Street Baptist Church

Why did the Second Attempt to Establish a Lasting Baptist Presence in Hungary Succeed?