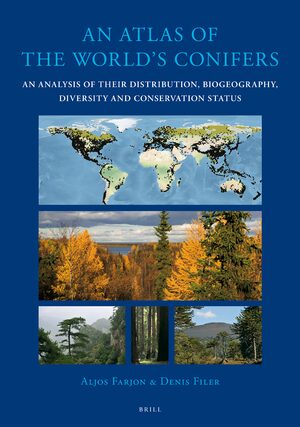 An Atlas of the World's Conifers

An Analysis of their Distribution, Biogeography, Diversity and Conservation Status

An Atlas of the World's Conifers is the first ever atlas of all known conifer species. It is based on locality information of ca. 37,000 collected herbarium specimens held in scientific institutions. As well as providing natural distribution maps for each species, Farjon and Filer give the reader comprehensive insight into the biogeography, diversity and conservation status of conifers on all continents, dispelling the widely held view that they are primarily a northern boreal plant group. Conifer diversity is analysed and presented with a taxonomic and geographic perspective. Distribution patterns are interpreted using the latest information on continental drift, dispersal and phylogeny. The entire dataset supporting the Atlas can be consulted and verified online. These data can also be used for further research and are an invaluable resource for anyone working on conifer systematics, biogeography or conservation.

An Atlas of the World’s Conifers indicates the known distribution of all conifers including an analysis of their biogeography, diversity and conservation status.

€163.00$212.00
​
Add to Cart
Aljos Farjon is based at the Royal Botanic Gardens Kew. He is acknowledged as the world's foremost expert on conifer systematics and has published 12 books and more than 50 papers on this subject. He is chairman of IUCN's Conifer Specialist Group since 1995.

Denis Filer is based at the Department of Plant Sciences, University of Oxford. His work has led to the development of the Botanical Research And Herbarium Management System (BRAHMS) which is now used globally for systematics, floristics, botanical survey and plant diversity analysis.

"From a global perspective to a continental focus, this atlas is a superb example of rich species information. More than a basic atlas, this volume offers rich details for each map, ranging from biogeography to site diversity to conservation. [...] This atlas is extremely well referenced, with tables and indexes that will help amateurs locate all the relevant maps for a particular species. A companion website, Conifers of the World, will be helpful to those looking for related data, high-resolution images and more. [...] Summing up: Highly Recommended."
- J. Clemons, State University of New York-ESF in CHOICE June 2014, Vol. 51, No. 10
Of specific interest to all conifer biologists but with a far wider relevance to plant biogeographers, conservation scientists and botanists from the under-graduate level upwards.