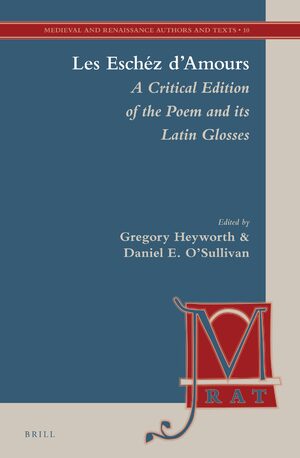 A Critical Edition of the Poem and its Latin Glosses

Authors: Gregory Heyworth, Daniel E. O'sullivan and Frank Coulson
Les Eschéz d’Amours may be the last great medieval allegory to find its way into a modern edition. In the tradition of the Roman de la Rose, the Eschéz surveys matters of love, politics, economics, music, medicine, and chess through the lens of classical and Scholastic learning. In addition to the first 16,293 (of over 30,000) verses newly edited out of the manuscripts, the editors present a complete apparatus of literary, historical and linguistic essays that place the poem in the context of the scholarly and courtly life of late 14th century Paris. The important Latin glosses of the Venice manuscript of the Eschéz follow in an edition of their own, with critical notes and translation.
E-Book

€216.00$279.00
​
Add to Cart
Gregory Heyworth, Ph.D. (2001) Princeton University, is Associate Professor of English at the University of Mississippi. He publishes on English, French, Italian and Latin literature of the Middle Ages, including most recently Desiring Bodies: Ovidian Romance and the Cult of Form (Notre Dame, 2009)
Daniel E. O'Sullivan, Ph.D. (2000) Boston College, is Associate Professor of French at the University of Mississippi. A specialist in medieval French literature, he has recently edited Chess in the Middle Ages and Early Modern Age (De Gruyter, 2012) and co-edited Shaping Courtliness in Medieval France (Boydell and Brewer, 2013).
Frank T. Coulson (Ph.D. (1982) University of Toronto is Professor of Classics at The Ohio State University. He publishes on the medieval Latin school tradition on Ovid and on Latin palaeography. Most recently he has edited with James Clark and Kathryn McKinley Ovid in the Middle Ages (Oxford, 2011).
Acknowledgements ... vii
Abbreviations and Sigla... ix

Those interested in medieval literature in general and French literature in particular, those with a general interest in the history of chess and games, allegory, didactic literature, music, and mirrors for princes.