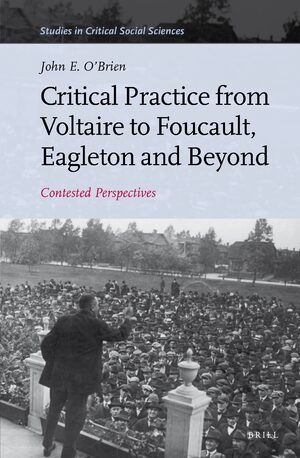 Critical Practice from Voltaire to Foucault, Eagleton and Beyond

Author: John E. O'Brien
Using the historical-materialist method to unravel the promise and limits of critical practice since the Revolutionary Age, John E. O’Brien investigates the problems and prospects of cultural criticism for the 21st century through absorbing studies of the contested perspectives of Voltaire, Friedrich Schiller, Jean Baudrillard, Michel Foucault, Terry Eagleton and Hayden White.

In spite of recurrent crises due to a flawed Western political-economy, why is there so much critical intellectual activity with so little effect? Framing his study with the early work by Max Horkheimer, Luc Boltanski and Teresa Ebert, O’Brien's investigation of resistance in America and Europe challenges the bourgeois philosophy of history, pointing to the urgency of critique as mode of analysis and intervention.

1. What is Critical Practice?

4. Foucault: The End of Evasion

Engaged university students and researchers in social sciences and humanities worldwide, interested in cultural criticism, the historical-materialist method, the crisis of modernity and the future for the West and The Rest.