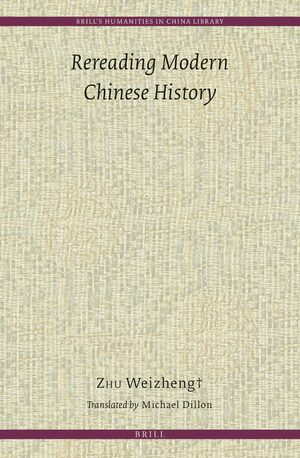 Editor: Michael Dillon
Author: Zhu Weizheng
Rereading Modern Chinese History is a collection of short essays on aspects of the history of the Qing dynasty, a regime dominated by Manchus that ruled China from 1644 to 1911. Using sources from that period and earlier it addresses key themes on the nature of Qing rule. These include the defeat by the British in the Opium Wars, the twin-track administration of Manchus and Han Chinese, the rise of Chinese military leaders in southern China, the purchase of office and endemic corruption, the challenge of the Taiping Heavenly Kingdom, and the failure of political reform. There are new insights on all the Qing emperors and the Empress Dowager Cixi, who ruled China between 1861 and 1908.
E-Book (PDF)

€143.00$188.00
​
Add to Cart
Zhu Weizheng† (1936~2012) was Professor of History at Fudan University, China. He published monographs and many articles on Chinese cultural history, Chinese intellectual history and Chinese Confucian studies.

Students and others interested in the history of the Manchus and the Qing dynasty (1644-1911).