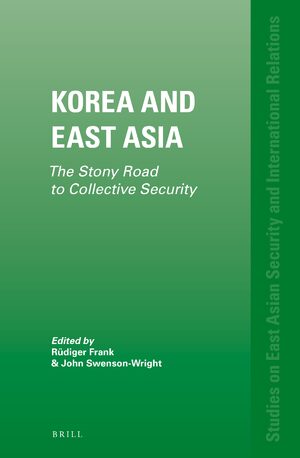 The Stony Road to Collective Security

Series:  Studies on East Asian Security and International Relations, Volume: 1
Editors: Rüdiger Frank and John Swenson-Wright
Will the twenty-first century be the Asian century? Will the People’s Republic of China overtake the United States as the leading global superpower? Will an armed conflict break out on the Korean peninsula, and can it be contained? While opinions differ strongly, there seems to be a certain consensus that the East Asian region, roughly defined as Northeast Asia (China, the two Koreas, Japan and the Russian Far East) plus Southeast Asia (ASEAN), will be ever more globally significant in the years to come. This book critically addresses the potential of the liberal concept of collective security to provide a solution, with a focus on the Korean peninsula.
E-Book (PDF)

€104.00$134.00
​
Add to Cart
Rüdiger Frank is Professor of East Asian Economy and Society at the University of Vienna. His major research fields are socialist transformation in East Asia and Europe (with a focus on North Korea), state-business relations in East Asia, and regional integration in East Asia. His most recent books are: (with S. Burghart, eds., 2010) Driving Forces of Socialist Transformation: North Korea and the Experience of Europe and East Asia; (ed., 2011) Exploring North Korean Arts; and (with J. Hoare, P. Köllner and S. Pares, eds., 2011) Korea 2011: Politics, Economy, and Society.

All interested in security and international relations in East Asia, with a focus on Korea and on the concept of collective security.