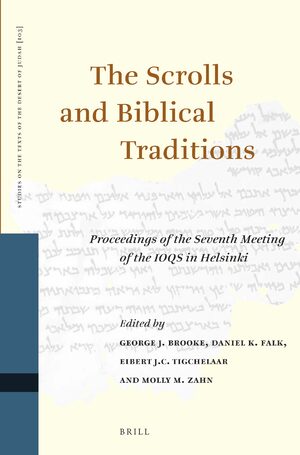 The Scrolls and Biblical Traditions

Proceedings of the Seventh Meeting of the IOQS in Helsinki

Editors: George J. Brooke, Daniel K. Falk, Eibert J.C. Tigchelaar, and Molly M. Zahn
Recent Dead Sea Scrolls research pays much attention to the question which texts were seen as scriptures, in which forms scriptures as well as scriptural traditions were transmitted, how the scrolls can illuminate the gradual move from authoritative scriptural texts to canon, and which different kinds of scriptural interpretation are attested in the Dead Sea Scrolls. This volume contains twelve essays read at the seventh meeting of the International Organization for Qumran Studies that address these questions either broadly, or in relation to specific texts.
E-Book (PDF)

€132.00$164.00
​
Add to Cart
George J. Brooke, Ph.D. Claremont, D.D. Oxford, is Rylands Professor of Biblical Criticism and Exegesis, University of Manchester, England. Amongst many other publications, especially on the Scrolls, he has co-edited The Significance of Sinai (Brill, 2008) and The Mermaid and the Partridge (Brill, 2011).

Daniel K. Falk (Ph.D. Cambridge 1996) is Professor of Ancient Judaism and Biblical Studies at the University of Oregon. His is author of Daily, Sabbath, and Festival Prayers in the Dead Sea Scrolls (1998) and Parabiblical Texts (2007).

Eibert J. C. Tigchelaar, Ph.D. (1994), University of Groningen, is Research Professor at the KU Leuven. Amongst other publications, mainly on the Scrolls, he has co-edited Qumran Cave 1 Revisited (Brill, 2010).

Molly Zahn, Ph.D. (2009), University of Notre Dame, is Assistant Professor of Religious Studies at the University of Kansas. She is the author of Rethinking Rewritten Scripture: Composition and Exegesis in the 4QReworked Pentateuch Manuscripts (Brill, 2011).

George J. Brooke, Scripture and Scriptural Tradition in Transmission: Light from the Dead Sea Scrolls
Jonathan G. Campbell, Josephus’ Twenty-two Book Canon and the Qumran Scrolls
Corrado Martone, All the Bibles We Need: The Impact of the Qumran Evidence on Biblical Lower Criticism
John Elwolde, The Hodayot’s use of the Psalter: text-critical contributions (Book 4: Pss. 90-106)
Hans Debel, Editions, Reworkings, and the Continuity of Tradition: Some Experimental Considerations on the Genesis Apocryphon
Michael J. Lesley, Exegetical Wiles; 4Q184 as Scriptural Interpretation
Mika S. Pajunen, The Prayer of Manasseh in 4Q381 and the Account of Manasseh in 2 Chronicles 33
Bilhah Nitzan, 4Q470 In Light of the Tradition of the Renewal of the Covenant Between God and Israel
Hannah Harrington, How Does Intermarriage Defile the Sanctuary?
Gudrun Holtz, Temple and Purification Rituals: From Torah to the Dead Sea Scrolls
Albert L. A. Hogeterp, Relations to Gentiles in the Damascus Document and Biblical Tradition
John Kampen, “Torah” and Authority in the Major Sectarian Rules Texts from Qumran

All interested in the Dead Sea Scrolls, or, more generally, in the early transmission, canonization, and interpretation of the Hebrew scriptures