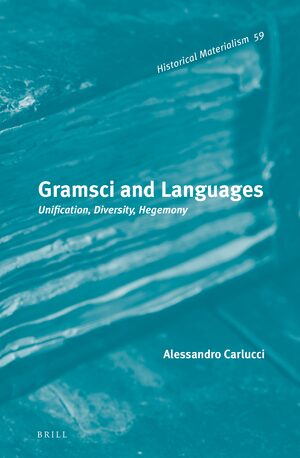 Author: Alessandro Carlucci
Winner of the prestigious 'Giuseppe Sormani International Prize' for the best monograph on Antonio Gramsci (4th edition, 2012-2017).
Antonio Gramsci (1891-1937) is one of the most translated Italian authors of all time. After the Second World War his thought became increasingly influential, and remained relevant throughout the second half of the century. Today, it is generally agreed that his Marxism has highly original and personal features, as confirmed by the fact that his international influence has continued to grow since the fall of the Berlin Wall and the collapse of the Soviet Union. Gramsci and Languages offers an explanation of this originality and traces the origins of certain specific features of Gramsci’s political thought by looking at his lifelong interest in language, especially in questions of linguistic diversity and unification.
E-Book (PDF)

€125.00$151.00
​
Add to Cart
Alessandro Carlucci, Ph.D. (London, 2010), is Lector in Italian at the University of Oxford. He has published widely on Gramsci, and is the editor of New Approaches to Gramsci: Language, Philosophy and Politics, special issue of the Journal of Romance Studies (2012).
AWARDS
Gramsci and Languages by Alessandro Carlucci has been awarded the prestigious 'Giuseppe Sormani International Prize' for the best monograph on Antonio Gramsci (4th edition, 2012-2017). The book is one of the two 'ex aequo' winners.

REVIEWS
“Carlucci’s study is a meticulous and at times brilliant exploration of Gramsci’s relationship with the linguistic question […] a very enjoyable and informative read for anyone passionate about Gramscian matters, and about language in a social context more generally.”
Neelam Srivastava, Senior Lecturer in Postcolonial Literature at Newcastle University, H-Italy (March 2016).

"So much partial or misdirected work has recently appeared in English that appropriates Gramsci for its putative authority that Alessandro Carlucci (in Gramsci and Languages: Unification, Diversity, Hegemony) has done yeoman work providing new background and readings of the still untranslated parts of The Prison Notebooks (Lawrence & Wishart [1971]) to show about Gramsci’s lifelong interest in the interplay of culture, politics, and language. Carlucci places Gramsci’s university studies in linguistics under Matteo Bartoli as cementing Gramsci’s linkage of politics and language that came from his Sardinian origins. The nature of linguistic communication as a medium for controlling populations or possibility for contesting bourgeois hegemony remains an undertone to nearly all of Gramsci’s Prison Notebooks. Carlucci’s thorough review of linguistics in Gramsci has the benefit of knowing the entirety of the Prison Notebooks, which have unfortunately still remained largely untranslated. More importantly, Carlucci places these writings within the context of left debates of the time."
Professor Stephen Shapiro, University of Warwick, The Year's Work in Critical and Cultural Theory, Oxford University Press, 2014.

“The volume offers a comprehensive analysis of the interplay between political and linguistic reflections in the philosophy of Antonio Gramsci, during the diverse and very different periods of the life of this thinker and political leader. It begins in deepest Sardinia with a very young Gramsci, and passes through his experiences in Turin, Moscow and finally in prison. This comprehensive and meticulous close examination is claimed as the necessary methodology in the well-organised introduction (pp. 1-18) and, together with its ever compelling ideas, constitutes the volume’s main contribution […] The main merit of this volume is precisely that of bringing cohesion and unity to the study of a thinker who is first and foremost a political leader committed to action, but who in the end emerges as an important figure in the history of Italian linguistic thought.”
Luciano Giannelli, Rivista Italiana di Dialettologia, 2014.

“ Gramsci and Languages is a very important addition to contemporary studies on Gramsci. It should be of interest also to philosophers (and philosophers of language in particular), and to scholars in social, cultural, and political studies.”
Piotr Stalmaszczyk, Professor of English and General Linguistics at the University of Lodz, Marx and Philosophy Review of Books.

“With this book, Carlucci makes a significant contribution to the growing international scholarship and debates on Gramsci. The originality of Gramsci and Languages lies mainly in its ability to recast three fundamental aspects of Gramsci’s political, intellectual and personal biography: the role of Sardinia, the influence of Italian and European historical linguistics on the development of Gramsci’s thought, as well as his encounter with Bolshevism and Lenin’s thought.”
Giuseppe Vacca, President of the Fondazione Istituto Gramsci.

“This is a fascinating study of how Gramsci’s interest in language shaped his politics and political theory. The reader will find important, newly discovered material on the influence of both Saussure and Soviet scholars of the 1920s. This book gives the clearest and most up to date account of Gramsci the philologist as well as the political activist, and adds to our knowledge of the Sardinian’s life in the Soviet Union in the early 1920s.”
Carl Levy, Professor of Politics at Goldsmiths, University of London.

Introduction
Linguistic reflections as an integral part of Gramsci’s legacy
Modern linguistics and the philosophy of praxis
Towards a better understanding of Gramsci’s views
1. The limited number of writings usually considered
2. The risks involved in neglecting Gramsci’s biography
3. Identifying sources and cultural links: a productive trend in recent research
4. Linguistic themes and the debates on Gramsci’s Leninism
Diversity and unification: a few considerations in conclusion

1. Experiencing Linguistic Diversity and Cultural Unification
1.1. Sardinian in Gramsci’s life
1.2. Gramsci’s correspondence
1.3. The Sardinian years
1.4. Turin
1.5. The Sassari Brigade in Turin, April-July 1919
1.5.1. The arrival of the Brigade
1.5.2. The editorial board of L’Ordine Nuovo
1.5.3. The successful campaign among Sardinian soldiers
1.6. From Turin to the prison years
1.7. Gramsci’s views on national linguistic unification
1.7.1. ‘Every individual ... is a philosopher’
1.7.2. The shortcomings of monolingualism
1.7.3. Final remarks

Conclusions: Gramscian Links between Language and Politics
Gramsci in linguistics...
...and linguistics in Gramsci

All interested in Gramsci’s life and work, and in language and politics – including minority languages, language planning, educational language policies, as well as the history of linguistic ideas and of the international labour movement.