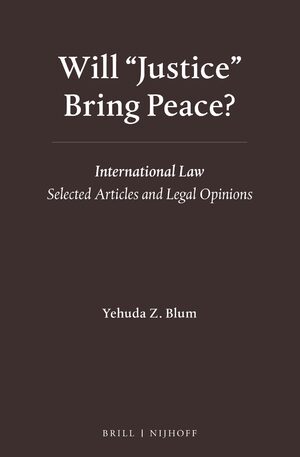 Author: Yehuda Z. Blum
The first part of this book contains a selection of articles written over five decades. The second part includes a selection of legal opinions written between 1962-1965, when the author was working in the legal department of Israel's Ministry of Foreign Affairs. An appendix reproduces a letter on anti-Semitism at the United Nations, sent by the author in his capacity as Israel's Ambassador and Permanent Representative to the UN and addressed to the UN Secretary-General.

The author's varied career, as a leading academic and high-ranking diplomat, offers a unique perspective on many aspects of international law, ranging from constitutional problems of the UN Charter to the Arab-Israel conflict. The author has chosen to reproduce all these writings in their original form, while being acutely aware that significant changes have occurred in many fields of international law in the intervening period. This he has done consciously in the belief that preserving his writings unchanged will, not only indirectly, attest to the fundamental shifts in many areas of international law, not all of which meet with his approbation.

Use of Force
8. The Beirut Raid and the International Double Standard. A Reply to Professor Richard A. Falk
9. State Response to Acts of Terrorism
10. Economic Boycotts in International Law

The Arab-Israel Conflict
11. The Missing Reversioner: Reflections on the Status of Judea and Samaria
12. The Juridical Status of Jerusalem
13. Operation Kadesh: A Legal Perspective
14. From Camp David to Oslo
15. The Evolution of Israel’s Boundaries

Miscellaneous
16. Israel and the United Nations: A Retrospective Overview
17. Privileges and Immunities of United Nations Officials in Israel
18. The Ratification of Treaties in Israel
19. Israel Marriage Law and Human Rights
20. De Facto Recognition and Diplomatic Immunities
21. Reflections on the Changing Concept of Self-Determination
22. Extradition: A Common Approach to the Control of International Terrorism and Traffic in Narcotic Drugs
23. The Gulf of Sidra Incident
24. The Role of Equity in International Law
25. On the Restitution of Jewish Cultural Property Looted in World War II

United Nations
23. Raising the Israeli Flag on Mount Scopus
24. Loss of Voting Rights in the UN General Assembly of a Member in Default of its Payments
25. South Africa’s Withdrawal from the International Labour Organization (ILO)