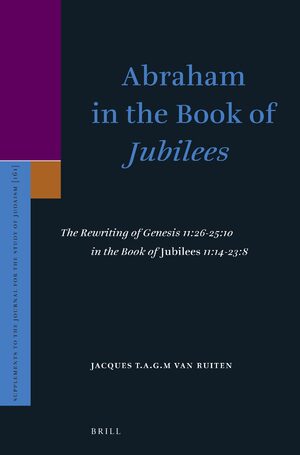 Abraham in the Book of Jubilees

Author: J.T.A.G.M. van Ruiten
In Abraham in the Book of Jubilees, Jacques van Ruiten offers a systematic analysis of one of the most important and extensive Second Temple Jewish treatments of the figure of Abraham (Jub. 11:14-23:8). Given the importance of representations and reinterpretations of Abraham within Judaism, Christianity, and Islam, a careful analysis of this early source is an important contribution to research both on the evolving images of biblical patriarchs and on the history of biblical interpretation.

There are many references to Jubilees in articles and books on images of Abraham. They are chosen for exegetical motifs, with little attention for its own literary and narrative dynamics, or for the specific writing and reading practices that it embodies and attests. Van Ruiten’s careful analysis thus provides important context and corrective.

€156.00$203.00
Hardback
Add to Cart
Jacques T.A.G.M. van Ruiten (Ph.D. 1990, Amsterdam), is Professor of the Reception History of the Bible at the University of Groningen. He has published extensively on the reception history of biblical texts, especially in early Judaism, including Primaeval History Interpreted: The Rewriting of Genesis 1-11 in the Book of Jubilees (Brill, 2000).
' The most helpful feature of the book for me was Van Ruiten’s markedup synopses of the Genesis and Jubilees texts. [...] This system makes it easy to tell the similarities and differences between Genesis and Jubilees, even on a first perusal. [...] Overall, the book is well written and well edited, with only rare typos. The sequential structure of the book reads very much like a commentary, which makes for a very helpful reference work, but a book which is somewhat difficult to read from cover to cover. Nevertheless, the analysis of each passage is
rich, and scholars working on particular passages in Jubilees cannot afford not to consult it.
'
Drew Longacre, Dead Sea Discoveries 24 (2017), p. 143.