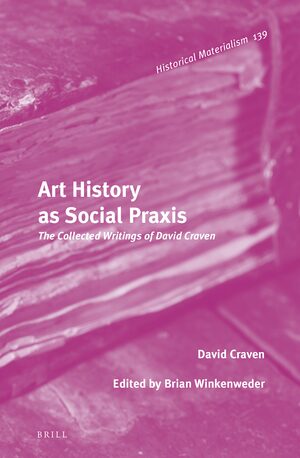 The Collected Writings of David Craven

Editor: Brian Winkenweder
Author: David Craven
Art History as Social Praxis: The Collected Writings of David Craven brings together more than thirty essays that chart the development of Craven’s voice as an unorthodox Marxist who applied historical materialism to the study of modern art. This book demonstrates the range and versatility of David Craven’s praxis as a ‘democratic socialist’ art historian who assessed the essential role the visual arts play in imagining more just and equitable societies. The essays collected here reveal Craven’s lifelong commitment to exposing interstices between western and non-western cultures by researching the reciprocating influences between First- and Third-World artists, critics and historians.
E-Book (PDF)

€143.00$165.00
​
Add to Cart
David Lee Craven, Ph.D. (1979), University of North Carolina, was Distinguished Professor at University of New Mexico and passed away in 2012. He was an art historian who displayed rare intellect and industry. In his lifetime Craven wrote more than fifteen monographs and exhibition catalogues on such diverse topics as Diego Rivera, Abstract Expressionism, Rudolf Baranik and art associated with Latin American revolutions. In addition to being a dedicated professor and inspirational lecturer, he published over 150 essays, articles and reviews in such academic journals as Art History, Kritische Berichte and Third Text and mass-circulation publications such as Arts Magazine and Tema Celeste; further, his writings have appeared in dozens of anthologies, encyclopaedias and newspapers.

1 Mondrian De-Mythologised: Towards a Newer Virgil

3 Marcel Duchamp and the Perceptual Dimension of Conceptual Art

5 Richard Serra and the Phenomenology of Perception

6 Hans Haacke and the Aesthetics of Dependency Theory

8 René Magritte and the Spectre of Commodity Fetishism

9 Ruskin vs. Whistler: The Case against Capitalist Art

10 The Critique-Poésie of Thomas Hess

12 Meyer Schapiro, Karl Korsch, and the Emergence of Critical Theory

13 Clement Greenberg and the ‘Triumph’ of Western Art

15 Prerequisites for a New Criticism

20 Art History and the Challenge of Post-Colonial Modernism

21 C.L.R. James as a Critical Theorist of Modernist Art

23 Formative Art and Social Transformation: The Nicaraguan Revolution on Its Tenth Anniversary (1979–1989)

24 Cuban Art and the Democratisation of Culture

28 Abstract Expressionism, Automatism, and the Age of Automation

31 A Legacy for the Left: Abstract Expressionism as Anti-Imperialist Art

All interested in Post-Colonial studies and Marxist-inflected cultural analysis, with particular regard for Critical Theory, Latin American art history and Abstract Expressionism.