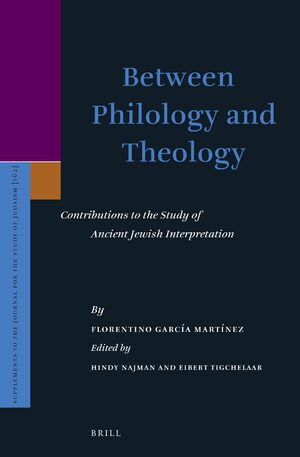 Between Philology and Theology

Contributions to the Study of Ancient Jewish Interpretation

Author: Florentino Garcia Martinez
Editors: Hindy Najman and Eibert J.C. Tigchelaar
The essays by Florentino García Martínez collected in this volume reflect some of his most recent work on theological concepts as they are formed in the interpretations and in the imagination of ancient Jewish writers, and thus illuminate the nexus between philology and theology.
The essays, five of which are published for the first time in English, engage a broad range of ancient Jewish texts ranging from Philo and the Dead Sea Scrolls, to Jubilees, 4 Ezra and the Targumim. Focus of the essays is the way in which ancient Jewish writers (and, in the case of 4 Ezra, Christian Renaissance authors) are interpreting and transforming earlier biblical traditions and how these new interpretations shape theological concepts.

€123.00$160.00
Hardback
Add to Cart
Florentino García Martínez was Professor of Early Judaism and Dead Sea Scrolls at the KU Leuven and at the University of Groningen where he led the Qumran Instituut. He was editorial secretary of the Revue de Qumrân, and editor-in-chief of the Journal for the Study of Judaism. He has written numerous books and articles on the Dead Sea Scrolls.

Hindy Najman, PhD. (Harvard University, 1998) is associate professor of ancient Judaism in the Department of Religious Studies and in the Program for Judaic Studies at Yale and author of Seconding Sinai and ' Past Renewals. Her areas of expertise are Second Temple Judaism, Hellenistic Judaism, Hebrew Bible, early Rabbinics and the History of Jewish Interpretation.

1. Abraham and the Gods: the Paths to Monotheism in Jewish Religion
2. The Foreskins of Angels
3. Geography as Theology: From the Book of Jubilees to the Phaleg by Arias Montano

4. The Heavenly Tablets in the Book of Jubilees
5. Balaam in the Dead Sea Scrolls
6. Divine Sonship at Qumran and in Philo