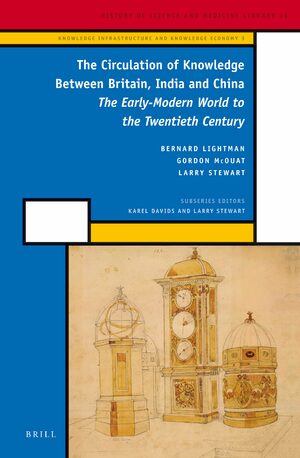 The Circulation of Knowledge Between Britain, India and China

The Early-Modern World to the Twentieth Century

Editors: Bernard Lightman, Gordon McOuat and Larry Stewart
In The Circulation of Knowledge Between Britain, India and China, twelve scholars examine how knowledge, things and people moved within, and between, the East and the West from the early modern period to the twentieth century. The collection starts by looking at the ways and means that knowledge circulated, first in Europe, but then beyond to India and China. It engages the knowledge and encounters of those Europeans as they moved across the globe. It participates in the attempt to open up more nuanced and balanced trajectories of colonial and post-colonial encounters. By focusing on exchange, translation, and resistance, the authors bring into the spotlight many "bit-players" and things originally relegated to the margins in the development of late modern science.

Gordon McOuat, PhD 1996, University of Toronto, is Professor of History of Science, University of King's College. Currently the Director of "Situating Science: Canadian National Cluster for the Humanities and Social Studies of Science", he has published The Origins of Natural Kinds (2009), Descartes and the Modern (Cambridge Scholars, 2008), Bentham's Logic (2008), amongst others.

Larry Stewart, Ph.D. (1978), University of Toronto, is Professor of History at the University of Saskatchwan. He has published numerous articles on 18th century science, The Rise of Public Science (Cambridge, 1992) and, with Margaret Jacob, Practical Matter. Newton's Science in the Service of Industry and Empire, 1687-1851 (Harvard, 2004).

I. Circulating Knowledge: James Dinwiddie in China, India, and Britain
1. The Spectacle of Experiment: Instruments of Circulation, from Dumfries to Calcutta and Back, by Larry Stewart
2. “Bungallee House set on fire by Galvanism”: Natural and Experimental Philosophy as Public Science in a Colonial Metropolis (1794-1806), by Savithri Preetha Nair
3. From Calcutta to London: James Dinwiddie’s Galvanic Circuits, by Jan Golinski

II Circulation Beyond Dinwiddie
4. Bringing Eastern Science to the West: Portuguese Voyages of Intellectual Discovery, by Arun Bala
5. Anthologizing the Book of Nature: The Circulation of Knowledge and the Origins of the Scientific Journal in Late Georgian Britain, by Jonathan R. Topham
6. Between Calcutta and Kew: The Divergent Circulation and Production of Hotus Bengalensis and Flora Indica, by Khyati Nagar

III. The Circulation of Evolution, Geology, and Antiquities in China
7. Knowledge Across Borders: The Early Communication of Evolution in China, by Yang Haiyan
8. Circulating Material Objects: The International Controversy Over Antiquities and Fossils in Twentieth-Century China, by Fa-ti Fan
9. Going with the Flow: Chinese Geology, International Scientific Meetings and Knowledge Circulation, by Grace Yen Shen

IV. Building Science in Modern India
10. How May We Study Science and the State in Postcolonial India?, by Jahnavi Phalkey
11. A Western Scientist in an Eastern Context: J. B. S. Haldane’s Contributions to the Development of Science in India, by Veena Rao

V. Conclusion
12. Translation as Method: Implications for History of Science, by Sundar Sarukkai

Index
All interested in the wide circulation of scientific knowledge between Europe, India and the Far East, from the 18th to the 20th centuries.