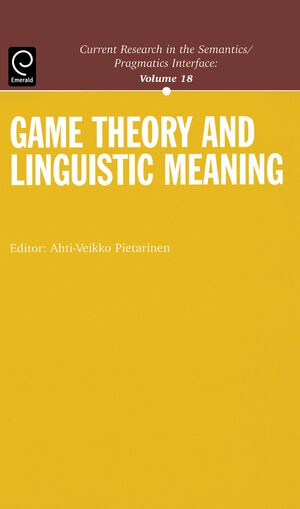 Editor: Ahti-Veikko Pietarinen
This is the first book to collect research on game-theoretic tools in the analysis of language with particular reference to semantics and pragmatics. Games are significant, because they pertain equally to pragmatics and semantics of natural language. The book provides an overview of the variety of ways in which game theory is used in the analysis of linguistic meaning and shows how games arise in pragmatic as well as semantic investigations. The book is a balanced combination of philosophical, linguistic, logical and mathematical argumentation. The book has an introductory and a concluding chapter, written by the editor, to give a gentle introduction to the topics covered in the book and to provide wider conclusions and prospects arising from the individual essays.
The major topics covering the field of game theory and linguistic meaning included in the book are: language games, Wittgenstein evolutionary language games communication games, Grice games of partial information equilibrium semantics game-theoretic semantics logical modelling, and generalised quantifiers the semantics/pragmatics distinction. It includes international contributions from known leaders in the field. It is part of the Current Research in Semantics/Pragmatics Interface series.
E-Book