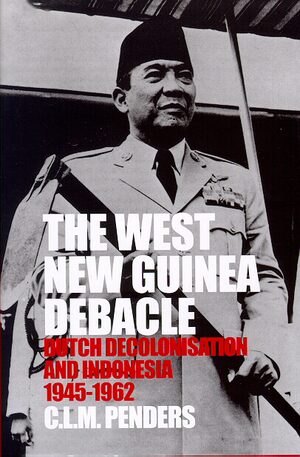 Author: C.L.M. Penders
This is a history which deals with the end of the Dutch colonial rule, the early independent Indonesia, the West New Guinea question, and the emergence of Papuan nationalism. The book chiefly concentrates on Dutch policies ands perspectives, which have so far generally been ignored in existing English language publications.
Netherlands-Indonesian relations between 1950 and 1958 are treated in depth, with a description and analysis of the struggle for power between the early, more Western-attuned and economic-rationalist cabinets, on the support of which the fate of the vast Netherlands-controlled export economy was dependent, and the masses, driven by Sukarno and the populist parties.
West New Guinea and Papua nationalism began as early as the 1920s and 1930s, and by the early 1950s the Dutch had set about guiding the Papuans towards independence. This policy had to be aborted, however, with the threat of an Indonesian invasion and the unwillingness of the US to provide armed support to Dutch forces. As a result, Australia, too, was reluctantly forced to abandon the Dutch. Australia was forced to accept the inevitable. It had actively encouraged the Netherlands to hold onto West New Guinea, completed agreements on economic and social cooperation, and conducted in-depth studies about a possible Australia-Dutch defence system against Indonesian aggression. Without US military support, however, the situation became untenable.
This book will be required for those seeking to understand the genesis of the situation in West New Guinea today, where Papuan nationalism is again in the ascendant following the recent dramatic events leading to the independence of East Timor.
Co-published with Crawford House Publishing
Hardback