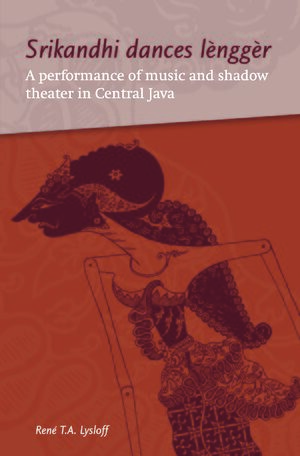 A Performance of Music and Shadow Theater in Central Java

Series: Verhandelingen van het Koninklijk Instituut voor Taal-, Land- en Volkenkunde, Volume: 248
Auteur : René Lysloff
The book is structured around the translation of a Javanese shadow theater performance entitled Srikandhi Mbarang Lènggèr (“Srikandhi Becomes an Itinerant Dancer” or “Srikandhi Dances Lènggèr”), performed only in the Banyumas region (in west Central Java) by the locally renowned puppeteer, Ki Sugino Siswocarito. This study is a translation of the story both in a strict textual-linguistic sense and in a more general interpretive sense, providing an understanding of what the performance means to its Banyumas audience. More important, it shows how the puppeteer transforms the culturally universal traditions of Javanese ritual, shadow-puppet theater, and music to particularize the entire performance event for a local audience.
The book is three things: a major conceptual study that develops, advocates, and applies an interdisciplinary approach to the analysis of the performance process, an important secondary source on rural Javanese culture and arts (most works on Java focus on the court centers), and a useful primary source on wayang theater—since it includes the Javanese text and English translation of a complete story with music transcriptions provided in an appendix. The Javanese texts and their English translations are laid out side by side to facilitate reading while listening to the audio recording on the enclosed dvd. The book contains twenty-five beautifully rendered illustrations of Banyumas-style wayang puppets (major characters in the story) by two Javanese artists.
E-Book (PDF)

From  83,00 $
​
Add to Cart
René T.A. Lysloff is an Associate Professor of Music (Ethnomusicology) at the University of California-Riverside. He has conducted research on traditional and contemporary arts in Central Java for more than twenty years. Lysloff has published articles in Ethnomusicology, Asian Theatre, Cultural Anthropology, and other journals and collections (including the Garland Encyclopedia of Music). Also, he co-edited (with Leslie Gay) Music and Technoculture (2003, Wesleyan University Press).