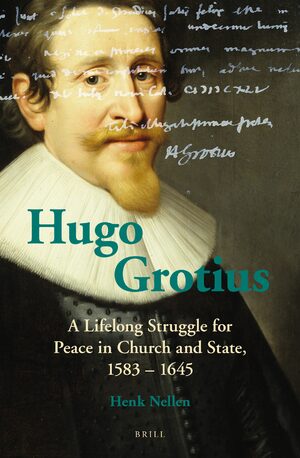 Editor: Henk J.M. Nellen
Hugo Grotius (1583-1645) is the most famous humanist scholar of the Dutch Golden Age. He wrote influential works on the laws of war and peace, Dutch history and the unification of the churches. His plea for a freedom of the seas in Mare liberum offered the Dutch East India Company a ready justification for the establishment of a trading empire in the East Indies. As far as his daily duties left him any spare time, he penned confidential, learned and beautifully-written letters. This voluminous correspondence offers a trove of information on Grotius’ life and works, and forms the basis of his newest biography which sketches a life caught in a fierce struggle for peace in Church and State.
E-Book

€60.00$69.00
​
Add to Cart
Henk Nellen (1949) is staff member of the Huygens Institute (The Hague) and teaches Early Modern History of Ideas at the Erasmus University Rotterdam. He has co-edited the last five volumes of Hugo Grotius’ correspondence, bringing this almost century-long undertaking to completion in 2001.
AWARDS

‘As a comprehensive study of the extensive life records of one of the major figures of late humanist intellectual, political and religious culture, it sets a daunting benchmark. […] this book […] can already be ranked alongside the best studies of the seventeenth-century republic of letters, and selections from it would serve as an outstanding introduction to late humanism for advanced undergraduates or graduate students.’
Nicholas Hardy (Trinity College), in: Journal of early modern history 20 (2016), pp 497-499.

‘this book is the standard that any future studies of Grotius must consult’
Keith D. Stanglin (Austin Graduate School of Theology), in: Church History and Religious Culture 96 (2016), pp. 208-209.

‘Nellen gives us a comprehensive and detailed biography of this complex and important figure. Originally published in Dutch, this English translation makes Grotius’s ideas and writings accessible and explicable to a wider audience. In particular, Nellen superbly explains the substance of the religious disputes that absorbed Protestants across Europe in the seventeenth century and elucidates their political dimensions both in the Netherlands and internationally. […] Anyone researching Grotius, Grotian ideas, and the early history of the Netherlands will find this an immensely useful work. Readers in other fields, principally the history of seventeenth-century religious conflicts in Europe and early modern political theory, will also find this a valuable source of information.’
Deborah Baumgold (University of Oregon), in: Renaissance Quarterly 69, No.1 (2016), pp. 315-316.

Index of Personal Names and Works Written by Grotius ... 807

Illustration Section (colour)
All those interested in seventeenth-century history of politics, religion and scholarly life.