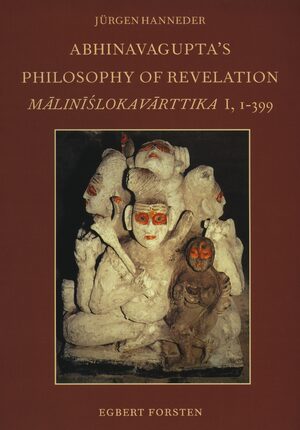 An Edition and Annotated Translation of Mālinīślokavārttika I, 1-399

Author: Jürgen Hanneder
The first part of the ‘Versified Commentary on the Mālinītantra’ (Mālinīślokvārttika) by the tenth-century theologian Abhinavagupta, which is translated here for the first time, presents a philosophy of Śaiva revelation, conceived of as a descent of the highest non-dual form of knowledge, through the different levels of speech, into the knowledge embodied in the canon of Tantras or Agamas on which the Śaiva religion is based. The aim of the text is to demonstrate the logic behind the claim of the monistic Tantric schools on which Abhinavagupta bases his philosophy.

The present volume deals in its introduction with the scriptural background of the Śaiva religion because that is a prerequisite for understanding many of the arguments in the text. The translation is accompanied by a re-edition of the Sanskrit text with the help of two manuscripts not consulted before, and a running commentary. A fragment of the Śrīkaṇṭī, which is probably the source for some of Abhinavaguptas theories of the Śaiva canon, is transcribed in an appendix.