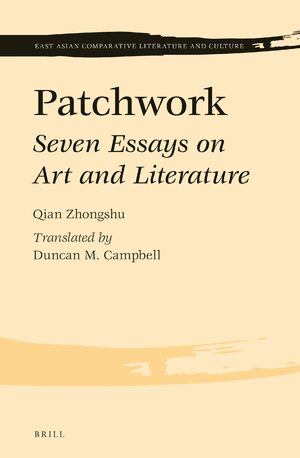 Seven Essays on Art and Literature

Editor: Duncan M. Campbell
Author: Zhongshu QIAN
Patchwork: Seven Essays on Art and Literature presents in English translation a number of essays written by the Chinese literary scholar and novelist Qian Zhongshu (1910-1998). One of the great minds of the twentieth century, Qian, with his characteristic erudition and wit, addresses here aspects of the classical literary and artistic traditions of China. Better known, as a scholar, for his magisterial Limited Views: Essays on Ideas & Letters (Guanzhui bian) (1979-80) and, as a novelist, for his Fortress Besieged (Weicheng) (1947), these essays, first written during the period 1948-83 and much revised over the years, allow readers insight into Qian’s abiding concern with “striking connections” between disparate literary, historical, and intellectual traditions, ancient and modern, Chinese and Western.

Dr. Duncan Campbell was awarded the China Book Award for Special Contributions at the 23rd Beijing International Book Fair. Dr. Campbell received this award for his translation of this volume.
E-Book

€130.00$160.00
​
Add to Cart
The Chinese literary scholar and novelist Qian Zhongshu (1910-1998) was one of the great minds of the twentieth century. Fluent also in a range of modern and classical European languages, his writings offer a remarkable engagement with the literary and artistic traditions of China.

Duncan M. Campbell teaches aspects of traditional Chinese culture, history, and classical literature and translation at the Australian National University in Canberra. His research focuses on the literary and material culture of the late imperial period in China.

"Duncan Campbell’s translation of Qian Zhongshu’s Patchwork: Seven Essays on Art and Literature is a labour of love that enables readers of English to reach deeper understandings of how one twentieth-century Chinese intellectual construed both Chinese and Western traditions in literature and the arts. [...] Rather than “domesticate” the text for an English-speaking audience, Campbell has chosen to make it rich in Chinese linguistic forms. The liberal inclusion of both pinyin and Chinese characters for key terms, easy to do now in our digital age, is a great boon to scholars who may wish to pursue further study of the sources and the arguments." - Ellen Soulliere, Massey University, in: New Zealand Journal of Asian Studies, Vol 17.1 (June 2015)
Series Editors' Foreword
Introduction by Professor Zhang Longxi
Translator’s Introduction

Poetry as a Vehicle of Grief
(translated by Siu-kit Wong)

An Historical Anecdote, a Religious Parable, and a Novel

Anyone interested in the classical literary and artistic traditions of China will find much of benefit and stimulation in this book, as will those concerned with aspects of comparative literature.