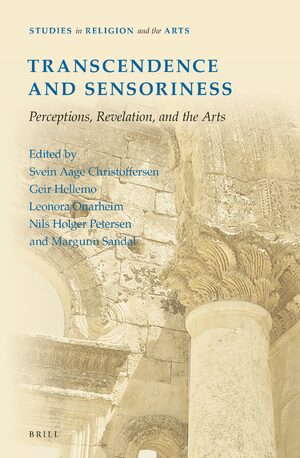 Perceptions, Revelation, and the Arts

Editors: Svein Aage Christoffersen, Geir Tryggve Hellemo, Leonora Onarheim, Nils Holger Petersen and Margunn Sandall
Protestant theology and culture are known for a reserved, at times skeptical, attitude to the use of art and aesthetic forms of expression in a religious context. In Transcendence and Sensoriness, this attitude is analysed and discussed both theoretically and through case studies considered in a broad theological and philosophical framework of religious aesthetics. Nordic scholars of theology, philosophy, art, music, and architecture, discuss questions of transcendence, the human senses, and the arts in order to challenge established perspectives within the aesthetics of religion and theology.
E-Book

€205.00$268.00
​
Add to Cart
Svein Aage Christoffersen, University of Oslo, is Professor of Systematic Theology. He has published monographs and many articles on Ethics, Aesthetics of Religion and History of Ideas, including The Illumination of Time in Space (In Raw, 2014).

Geir Hellemo, University of Oslo, has been Professor of Church History and Liturgy. He has published monographs and articles on liturgy, iconography and aesthetics, including Adventus Domini: eschatological thought in 4th-century apses and catecheses (Brill 1989)

Leonora Onarheim is a Doctoral Candidate in Systematic Theology at the University in Oslo. She has published several articles on the interception between contemporary art (Anselm Kiefer) and theology.

Nils Holger Petersen, University of Copenhagen, is Associate Professor of Church History. He has published widely on music and drama within the history of Christianity. He is editor for music for The Encyclopedia of the Bible and its Reception.

Margunn Sandal, Ordained Pastor in the Church of Norway and Lecturer at the University of Oslo. She wrote her doctorate on transcendence in sacred buildings (2014), and has published articles about Nordic church architecture, including Nature in Sacred Buildings (In Raw, 2014).