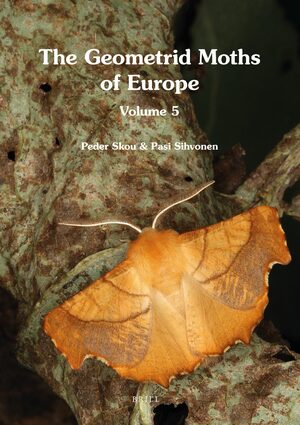 Authors: Pasi Sihvonen and Peder Skou
Half of European Ennominae, a total of 141 species are covered in this volume, including difficult genera like Crocallis, Aspitates and Dyscia. Not less than 709 specimens are illustrated in 16 colour plates. For each species the following information is provided: taxonomic data, description, distribution, phenology, biology including host plants, habitat, similar species, male genitalia, including the everted vesica, female genitalia, and distribution map. Genetic data from DNA barcoding is provided for most species. 145 text-figures of diagnostic characters and other morphological structures. The taxonomic part includes new synonymies, status revisions, new combinations and numerous new distribution data. A systematic catalogue of the European species and the adjacent regions of North Africa, Macaronesia, Turkey and Middle East is included also.
E-Book (PDF)

€186.00$213.00
​
Add to Cart
Peder Skou, born in Odense, Denmark in 1950, educated as an accountant in 1970, from 1974 to 1986 worked in the purchasing and cataloguing department in a public library. Since 1984 he has been a bookseller and publisher specialising in entomology and initiator of important series such as “The Geometrid Moths of Europe” and “Microlepidoptera of Europe”. Author of “Nordens Målere” (1984), translated into English as “The Geometroid moths of North Europe” and “Nordens Ugler” (1991).

Pasi Sihvonen, born in Turku, Finland in 1972, obtained his PhD in biology from the University of Helsinki in 2003. He has worked in expert positions at the Academy of Finland and the European Commission in the areas of research funding and research administration. Currently he is director of Research Services at the University of Helsinki. He is the author of over 40 scientific publications, focussing on the phylogeny and taxonomy of the Geometridae, particularly on the subfamilies Sterrhinae and Ennominae.
"this work very likely will be the standard largely followed in Europe, western Asia, and northern Africa for many years to come"
- Luke G. Jacobs in American Entomologist, vol 61, no 3, September 2015.