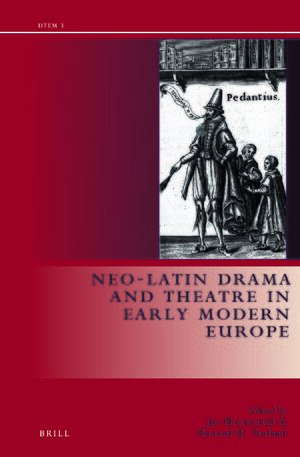 Series:  Drama and Theatre in Early Modern Europe, Volume: 3
Editors: Jan Bloemendal and Howard Norland
From ca. 1300 a new genre developed in European literature, Neo-Latin drama. Building on medieval drama, vernacular theatre and classical drama, it spread around Europe. It was often used as a means to educate young boys in Latin, in acting and in moral issues. Comedies, tragedies and mixed forms were written. The Societas Jesu employed Latin drama in their education and public relations on a large scale. They had borrowed the concept of this drama from the humanist and Protestant gymnasia, and perfected it to a multi media show. However, the genre does not receive the attention that it deserves. In this volume, a historical overview of this genre is given, as well as analyses of separate plays.

€188.00$245.00
​
Add to Cart
Jan Bloemendal (1961) is a senior researcher at the Huygens Institute for the History of the Netherlands of the Royal Netherlands Academy of Arts and Sciences. His research topics include Erasmus, drama and the interplay between Latin and vernacular literatures. In 2010 he published Gerardus Joannes Vossius, Poeticae Institutiones / Institutes of Poetics.

Howard B. Norland is an Emeritus Professor at the University of Nebraska, Lincoln. His research interests include critical theory and performance in early modern drama and the classical tradition. Among his publications are Drama in Early Tudor Britain 1485-1558 (1995) and Neoclassical Tragedy in Elizabethan England (2009).

“While some of the essays provide clear assessments of the state of research, this is implicit in the collection as a whole, which consummately captures the ‘‘multiplicity of complex combinations’’ available in the huge corpus of early modern Neo-Latin drama and provides timely encouragement and dependable foundations for further work.”
Andrew W. Taylor, University of Cambridge. In: Renaissance Quarterly, Vol. 67, No. 4 (Winter 2014), pp. 1306-1308.

“The best general reference is Bloemendal and Norland (2013), which will lead readers to further secondary literature.”
Stefan Tilg, University of Freiburg. In: The Oxford Handbook of Neo-Latin, "Comedy" (p. 99).

“The subject of Neo-Latin drama is particularly extensive, largely because the genre was international, cross-cultural and adapted to very different audiences throughout its history. The standard reference is now Bloemendal and Norland (2013).”
Gary R. Grund, Rhode Island College. In: The Oxford Handbook of Neo-Latin, "Tragedy" (p. 116).
List of Illustrations
Preface
Map showing places of Neo-Latin dramatic activity