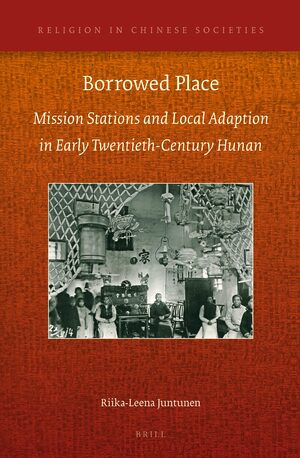 Author: Riika-Leena Juntunen
In Borrowed Place: Mission Stations and Local Adaption in Early Twentieth-Century Hunan Riika-Leena Juntunen creates a microhistorical narrative around the establishment, reception, and development of Lizhou protestant stations during the turbulent years of popular nationalism and early communist activity. The book examines the changing place identity around the stations from political, religious, ritual, cultural, and gendered perspectives, revealing a Chinese semi-religious community with varying motivations and in constant dialogue with its surroundings. The group developed its own normative code and hierarchy, and it offered both economic and religious benefits according to local models. Yet the developing political situation also meant it had to solve the question of anti-foreignism to be able to continue its existence.

All interested in the grassroots view on early twentieth century Chinese society and anyone concerned about Chinese religiosity and community building, localized Christianity, and motivations behind joining religious movements.