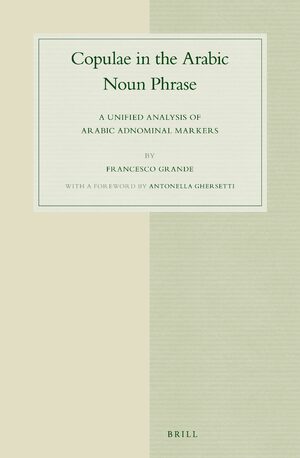 Copulae in the Arabic Noun Phrase

著者： Francesco Grande
Morphemes combined with the Arabic noun are clearly described in the literature, but their interpretation can be somewhat nebulous, and a unified scholarly analysis does not as yet exist. This book proposes a new and unified perspective regarding these morphemes, analyzing them as copulae, and the constructions in which they occur as instances of predication.
Analyzing morphemes combined with the Arabic noun as copulae explains many of their puzzling properties (rise and loss of declension, proteiform nature of nunation, etc.). Emphasis is placed on data previously marginalized in the description of these morphemes, from pre-Classical Arabic transmitted by Arab Grammarians, Semitic languages that contributed to the emergence of Arabic through language contact, and roughly 30 languages genetically unrelated to Arabic.

From  € 144.00$ 173.00
​
加入购物车
Francesco Grande Ph.D. (2011), Università di Pisa, is a Researcher in Arabic Language and Literature at Università Ca' Foscari, Venezia. He has published articles on Arabic linguistics, and taught Arabic Language and Linguistics at the universities of Bologna and Milano.
"The topic of the Arabic noun phrase and the properties of its adnominal markers is not one of the most common topics in the literature. Its undertaking by the author should be applauded. The profusion of data used is evident in examples from Old Arabic, Classical Arabic, Modern Classical Arabic, all the way to Modern Arabic dialects, along with other Semitic languages. The methodology by which he investigates and achieves his results is commended. Comparisons are drawn not only between various dialects but also between competing theories. Shortcomings in the literature, along with the role this work plays, are identified and clearly expressed. All of this is written in sections that build on previous ones and chapters that complement and complete each other...the book makes a compelling argument and fills a need in the literature." – Kariema El Touny, on: Linguist List (April 2014)
Specialists in Arabic and Semitic linguistics (including dialectologists, scholars of Arabic linguistic thought), typologists with an interest in Arabic morphosyntax, and general linguists with an appreciable knowledge of Arabic grammar.