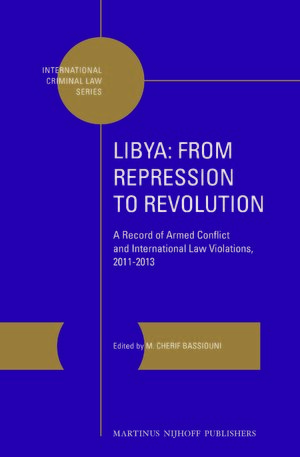 Libya: From Repression to Revolution

A Record of Armed Conflict and International Law Violations, 2011-2013

Editor: M. Cherif Bassiouni
This groundbreaking new volume provides the first comprehensive review of the Libyan conflict of 2011. The book expands on and complements the report of the Libya Commission of Inquiry to the United Nations Human Rights Council, and provides the reader with the information essential to understanding the Libyan conflict, its causes and ramifications, and the difficulties the country faces as it rebuilds in the wake of 40 years of repression and the effects of a brutal civil war.

The book provides a historical overview of the country and the ruinous policies of the Qadhafi regime, a chronological review of the evolution of the conflict, a description of the belligerents and their organizational makeup, an account of the NATO intervention and its legality, a basic legal characterization of conduct of the belligerents and the various accountability mechanisms pursued thus far, and an appraisal of the post-conflict period, as well as a detailed factual assessment and legal characterization of ten different theaters of conflict, including Benghazi, Tripoli, Misrata, Sirte and the Nafusa Mountains.

The staff members who participated in the general researching, drafting and editing of this book are Sara Parikh Drar, Jesse M. Franzblau, Angela Mudukuti, Douglass K. Hansen and Yousuf S Khan. The project also benefited from the assistance of Haydeh Eftekhar and the military expertise of Marc Garlasco.

"This voluminous work is essential reading and provides a mine of information for those interested in the Libyan civil war, in particular, and in the Arab Spring, in general."
Hilmi M. Zawati, Journal of International Criminal Justice, Vol. 14, No. 4 (2016).