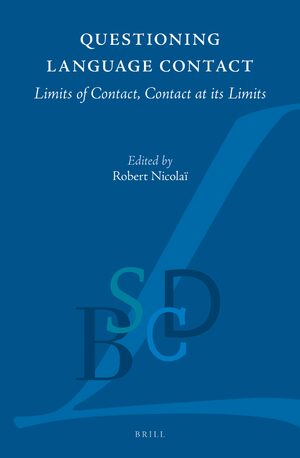 Editor: Robert Nicolaï
This volume critically exposes problems in present language contact analysis and uses empirical findings to provide answers to the following questions. What can we learn from the study of language contact for our knowledge of languages, their dynamics and their functions (systemic elaborations, language practices, semiotic developments)? How should linguistic theory incorporate the empirical findings of language contact studies, and how could these alter underlying postulates of existing models (choice of analysis and epistemic framework)? Which role has language contact been playing in the history of linguistic research and academic life? And how has this idea influenced individual researchers and their approaches?
E-Book (PDF)

€152.00$188.00
​
Add to Cart
Robert Nicolaï is a French linguist, member of the Institut Universitaire de France, recipient of the Research award Alexander von Humboldt, Emeritus Professor at the Université de Nice, founder and editor-in-chief of the Journal of Language Contact. He has published numerous articles and books, and has been instrumental in questioning established hypotheses on the evolution of Songhay languages as well as revisiting theoretical frameworks and attempting to establish an epistomological framework for language dynamics and the construal of meaning. He explores at once language contact phenomena, semiotic dynamics. Correlatively, his approach has led him to delve more deeply into the epistemology of the Humanities and how meanings take hold.