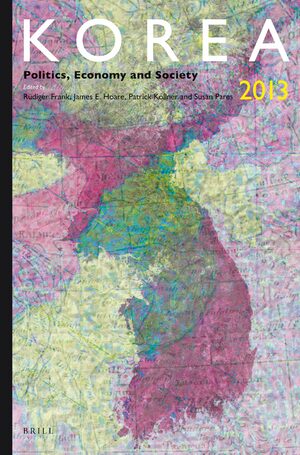 Volume Editors: Rüdiger Frank, Jim Hoare, Patrick Köllner, and Susan Pares
Korea 2013: Politics, Economy and Society contains concise overview articles covering domestic developments and the economy in both South and North Korea as well as inter-Korean relations and foreign relations of the two Koreas in 2012. Additional papers deal with topics such as the promotion of the South Korea-EU trade agreement, the globalisation debate in South Korean higher education, the ideational foundations of the South Korean Unification Church, environmental policy in North Korea, the role of multilateralism in North Korea's foreign policy, and US television portrayal of North Korea. A detailed chronology complements the articles.
E-Book (PDF)

€73.00$89.00
​
Add to Cart
Rüdiger Frank, Ph.D. (2001) in Economics, University of Duisburg, is Professor of East Asian Economy and Society at the University of Vienna. He has published on North and South Korean political economy. His current research is on North Korea's development and its East Asian context.
James E. Hoare, Ph.D. (1971) in Far Eastern History, University of London, was in the British Diplomatic Service from 1969 to 2003. He is a writer and broadcaster on East Asia as well as a Research Associate at both the School of Oriental and African Studies (SOAS), London and the Department of International Politics, University of Wales, Aberystwyth.
Patrick Köllner, Ph.D. (1998), is Director of the Institute of Asian Studies, GIGA German Institute of Global and Area Studies and a professor of political science at the University of Hamburg. From 1996 to 2006 he edited the German-language edition of the Korea Yearbook.
Susan Pares, was in the British Diplomatic Service from 1965 to 1987. She is a writer and editor on East Asian affairs.

All those interested in contemporary Korea, including academics and students in Korean studies, Asian studies, and the social sciences, but also business people, diplomats and other officials, and NGO representatives.