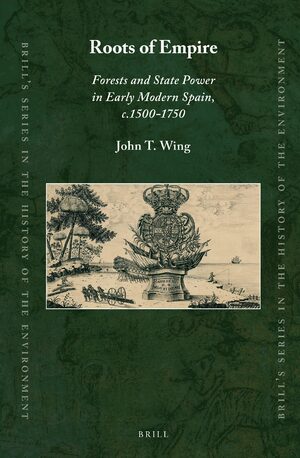 AutorIn: John T. Wing
Roots of Empire is the first monograph to connect forest management and state-building in the early modern Spanish global monarchy. The Spanish crown's control over valuable sources of shipbuilding timber in Spain, Latin America, and the Philippines was critical for developing and sustaining its maritime empire. This book examines Spain's forest management policies from the sixteenth century through the middle of the eighteenth century, connecting the global imperial level with local lived experiences in forest communities impacted by this manifestation of expanded state power. As home to the early modern world's most extensive forestry bureaucracy, Spain met serious political, technological, and financial limitations while still managing to address most of its timber needs without upending the social balance.
E-Book (PDF)

€ 116,00$ 152,00
​
In den Warenkorb
John T. Wing, Ph.D. (2009), University of Minnesota, is Assistant Professor of History at the College of Staten Island, The City University of New York. He has published articles on Spanish forest history in Environmental History and the Journal of Early Modern History.
This is a complex and well-written book that presents a powerful argument about the emergence of the state in connection to local practices (the use of forests) and global activities (empire, commerce, war).
- Antonio Barrera (Colgate University) American Historical Review, December 2018, 1752-1753 pp.

This book provides a rich, well-presented raw narrative for anyone interested in learning about processes of central state formation in early modern Europe, the military in mercantile empires, environmental history in the early modern world economy, and of course for specialists in Spanish history.
- Eva-Maria Swidler (Goddard College & The Curtis Institute of Music), Environmental History, vol 21, no 4, October 2016, 768-769 pp.

[…] it should be apparent that Wing makes a major contribution to our understanding of early modern Spain, Spanish seapower, Spanish environmental history, and state formation in early modern Spain. […] His monograph [...] is also a major contribution to the burgeoning field of environmental history in all its aspects. It is founded on an impressive command of the secondary literature and of key primary (archival) source materials, above all the Guerra series in Simancas for the Habsburg era and the Marina series in the same archive for the eighteenth century. The work is the more effective for Wing’s lucidity of conceptualization, argument and expression. While Spanish seapower, forests and state formation have been explored before for different periods […] they have not been put together hitherto in this way for the entire period and in English.[...] In sum, a work to be recommended for all interested in maritime history – and others. Christopher Storrs (University of Dundee, UK), The International Journal of Maritime History 2016, Vol. 28(3) 576–600
The author states several times his affinity for the area, which comes across in this engagingly written, entertaining, and informative work. Maritime historians and anyone with an interest in human interactions along the world’s waterways will find it useful reading.
- Robert S. Shelton (Cleveland State University), The International Journal of Maritime History, 2016, Vol. 28(3): 635-636

Forests were not only strategic resources for state navies, but also commons for local groups. John Wing’s Roots of Empire explores the process through which the Spanish monarchy gained increasing legal and effective control over littoral forests first and inland forest later. [...] Wing studies the history of forest management in relationship to the geopolitics of imperial naval expansion (or lack thereof ) during three distinct historical periods.
- Jorge Cañizares-Esguerra (University of Texas at Austin), Renaissance Quarterly, Vol. LXIX, No. 4, 1495-1496 pp.

1 A New State Forestry for the First Global Age 44
Crown and Forests, Redefined 44
Spanish Forest Landscapes from the Reconquest to the Habsburgs 47
Medieval Forest Regulations and Naval Power in the Reign of Carlos I (1516–1556) 54
A New Era of Naval Strategy in the Reign of Felipe II (1556–1598) 65
Forests and the Collection of Geographic Knowledge 70
The Enterprise of England: Recovery and Response 76

3 The Struggle to Stay Afloat in the Seventeenth Century 120
Transition and Persistence in Spanish Forests under the Later Habsburgs 120
State Forestry in Times of Peace and Global Conflict in the Early 1600s 122
To a New Generation of Forest Inspectors: Barros’s Letter to Riva Herrera 127
The Formation of Forest Superintendent Dynasties 130
The Waning of Spanish Imperial Might 138
Toribio Perez de Bustamante’s Instrucción of 1650 141
Colonial Forest Territoriality in the Seventeenth Century 145
Habsburg State Forestry in an Era of Naval Decline 156

4 Bottoming Out and Revival under the First Bourbon, 1700–1746 165
Expansion of State Forestry in the Reign of Felipe V (1700–1746) 165
Voices for Reform from the North Coast 168
Patino’s Tenure and the Reestablishment of the Almirantazgo 174
Forest Reconnaissance in the Naval Departments of Ferrol, Cartagena, and Cadiz 178
The Forest Inspections of Juan Valdes y Castro in Segura and Catalonia 183
Colonial Forest Territoriality in the Eighteenth Century 193
Accomplishments of Felipe V’s Reign 201

Anyone interested in the history of Spain and its empire, environmental history, forest history, state formation, and comparative early modern studies.