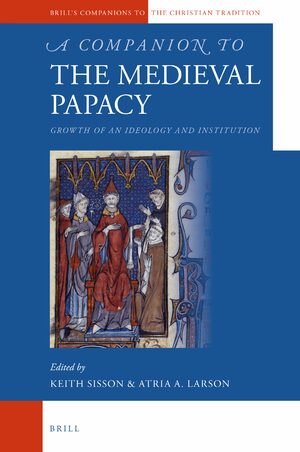 A Companion to the Medieval Papacy

Growth of an Ideology and Institution

Editors: Atria Larson and Keith Sisson
A Companion to the Medieval Papacy brings together an international group of experts on various aspects of the medieval papacy. Each chapter provides an up-to-date introduction to and scholarly interpretation of topics of crucial importance to the development of the papacy’s thinking about its place in the medieval world and of its institutional structures.

€172.00$212.00
​
Add to Cart
Keith Sisson, Ph.D. (2008), University of Memphis, is director of the Master of Arts in Liberal Studies program in University College at the University of Memphis. His monograph, Papal Hierocratic Theory in the High Middle Ages: From Roman Primacy to Universal Papal Monarchy (2009), examines the development of the hierocratic theory of government in the High Middle Ages, paying particular attention to the presentation of the theory during the Franco-papal conflict, 1296-1303. His primary areas of research are church and state relationships, political theory and practice, ecclesiology, cultural and intellectual history, and Scholasticism.


Atria A. Larson, Ph.D. (2010), Catholic University of America, is Visiting Scholar in the Center for Medieval and Renaissance Studies at Saint Louis University. She has published translations from Latin and German, editions of Latin texts, and articles in the field of medieval intellectual and legal history. Her monograph, Master of Penance: Gratian and the Development of Penitential Thought and Law in the Twelfth Century, won a 2015 Manfred Lautenschlaeger Award for Theological Promise.


“ A Companion to the Medieval Papacy is rare and welcome in that it offers a book accessible to readers at an entry level yet also contains serious scholarly essays, in English, with a good bibliography where readers can continue their investigations in multiple areas and at multiple levels. […] it is worth remarking on the fact that this is a splendidly produced volume, which includes a series of good reproductions of medieval images, works of art etc., in both black-and-white and colour.”
Robert Sommerville, Columbia University. In: The Journal of Ecclesiastical History, Vol. 69, No. 2 (April 2018), p. 385.

Part I: Popes and Princes, Polemic and Propaganda

2 Pro-Papacy Polemic and the Purity of the Church: The Gregorian Reform
Jehangir Malegam

Part IV: Beyond the Latin Church