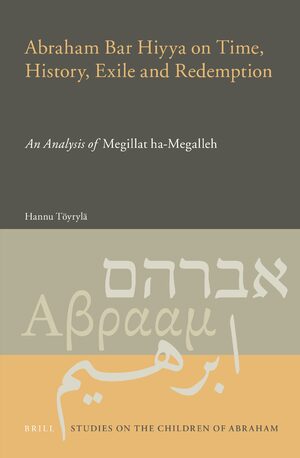 An Analysis of Megillat ha-Megalleh

Author: Hannu Töyrylä
An analysis of Megillat ha-Megalleh by Abraham Bar Hiyya (12th c.) as a complete text in its historical and cultural context, showing that the work - written at a time when Jews increasingly came under Christian influence and dominance – presents a coherent argument for the continuing validity of the Jewish hope for redemption. In his argument, Bar Hiyya presents a view of history, the course of which was planted by God in creation, which runs inevitably towards the future redemption of the Jews. Bar Hiyya uses philosophical, scientific, biblical and astrological material to support his argument, and several times makes use of originally Christian ideas, which he inverts to suit his argument.
E-Book (PDF)

€204.00$251.00
​
Add to Cart
Hannu Töyrylä, Ph.D. (2012 Turku), M.Sc (1982), is researching Jewish medieval thought, including its religious and scientific aspects, in its context between the Muslim and Christian civilizations.
"This is a book of major significance, adding greatly to our knowledge and appreciation of one of the outstanding medieval Jewish scholars. There is nothing whatever to fault in this study, or to add to it. We can only hope for further work from this brilliant young scholar."