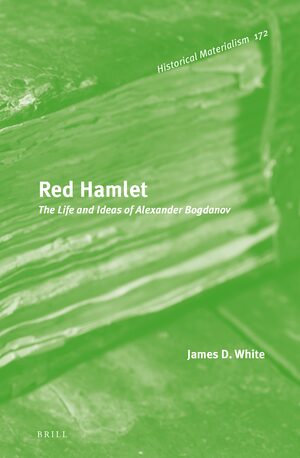 Red Hamlet: The Life and Ideas of Alexander Bogdanov

Author: James White
In this first full-length biography of Alexander Bogdanov, James D. White traces the intellectual development of this key socialist thinker, situating his ideas in the context of the Russian revolutionary movement. He examines the part Bogdanov played in the origins of Bolshevism, his role in the revolutions of 1905 and 1917 and his conflict with Lenin, which lasted into Soviet times. The book examines in some detail Bogdanov’s intellectual legacy, which, though deliberately obscured and distorted by his adversaries, was considerable and is of lasting significance. Bogdanov was an original and influential interpreter of Marx. He had a mastery of many spheres of knowledge, this expertise being employed in writing his chief theoretical work Tectology, which anticipates modern systems theory.
E-Book (PDF)

€170.00$204.00
​
Add to Cart
James D. White is Honorary Professor in the Department of Central and East European Studies at the University of Glasgow, UK. He is the author of Marx and Russia: The Fate of a Doctrine (Bloomsbury, 2018), Lenin: The Practice and Theory of Revolution (Macmillan, 2001), Karl Marx and the Intellectual Origins of Dialectical Materialism (Palgrave, 1996) and The Russian Revolution 1917-1921 (Edward Arnold, 1994).
"As a revolutionary whose vision rivaled Vladimir Lenin's and a thinker who laid the foundations for systems theory, Alexander Bogdanov has merited greater attention from biographers than he has so far received. James D. White's biography of him remedies this neglect [...] The book will be a valuable addition to research university libraries." - Barbara Allen, La Salle University, in: The Russian Review 78/4 (2019)

“With Red Hamlet, The Life and Ideas of Alexander Bogdanov, James D. White [explores] the life of one of the [Russian Revolution’s] most original and influential thinkers, Alexander Bogdanov… In seeking not only to explore Bogdanov’s life but to reconstruct his unique and intricate system of thinking, White sets himself an ambitious goal… as a comprehensive catalogue of Bogdanov’s works the study will be a useful addition to the reading list of both scholars and students of the Russian Revolution.” – Iva Glisic, in: Europe-Asia Studies 72/1 (2020)
Preface
1 Tula  1  Early Life  2  Radicalisation  3  Back in Tula  4  The Short Course of Economic Science  5  The Basic Elements of the Historical View of Nature  6  The Second Edition of the Short Course  7  Agitation  8  Kharkov
2 Kaluga  1  Lunacharsky  2  Mach  3  Avenarius  4  Avenarius and Mach
3 Vologda  1  The Exiles  2  Berdyaev  3  The Debates  4  What is Idealism?  5  Perception from the Historical Point of View  6  Problems of Idealism and Studies in the Realist World View  7  External Relations
4 The Alliance  1  Pravda  2  Meeting with Lenin  3  Our Misunderstandings  4  The Alliance  5  Pamphlets  6  In St Petersburg
5 The 1905 Revolution  1  After 9 January  2  Novaia zhizn  3  Revolution and Philosophy
6 Empiriomonism  1  Empiriocriticism  2  The Meaning of Objectivity  3  Universal Validity  4  Socially-Organised Experience and Individually-Organised Experience  5  Parallelism  6  Life and the Psyche  7  The First Volume of Empiriomonism  8  Akselrod-Ortodoks’s Criticism  9  The Second Volume of Empiriomonism  10  Plekhanov’s ‘thing-in-itself’  11  The Fourth Congress  12  The Third Volume of Empiriomonism and the Conflict with Plekhanov
7 Years of Reaction  1  The Fifth Congress  2  The Kotka Conference  3  Religion and Socialism  4  The Open Letter to Plekhanov  5  Materialismus Militans  6  Adventures of One Philosophical School  7  Studies in the Philosophy of Marxism  8  Socialist Society  9  Red Star
8 End of an Alliance  1  Ten Questions  2  The Paris Conference  3  God-Building  4  The Extended Editorial Board of Proletarii  5  Materialism and Empiriocriticism  6  The Fall of the Great Fetish
9 Vpered  1  Party Schools  2  The Translation of Marx’s Das Kapital  3  The Platform of Vpered  4  The Tenth Plenum of the Central Committee  5  The Bologna Party School  6  Longjumeau  7  Cultural Tasks of Our Times  8  The Course of Political Economy  9  Engineer Menni  10  The Fate of Vpered  11  Pravda Articles
10 Tectology  1  The Secret of Science  2  Tectology as Science  3  Organising Methods  4  Regulative Mechanisms  5  The Stability of Forms  6  Divergence and Convergence of Forms  7  Crises C and D  8  Tectology and General System Theory
11 The Philosophy of Living Experience  1  Philosophy in Tectological Perspective  2  The Materialism of Modern Times  3  Empiriomonism  4  The Science of the Future  5  A Decade of Excommunication from Marxism  6  Reaction to the War
12 War and Revolution  1  Bogdanov in the War  2  The Science of Social Consciousness  3  World Crises Peaceful and Military  4  Disagreement with Skvortsov-Stepanov  5  Bukharin  6  Will It Be Tomorrow?  7  The February Revolution  8  Bogdanov in 1917  9  What Is It That We Have Overthrown?  10  The Commune State  11  On Party Unity  12  Questions of Socialism
13 Proletkult  1  Proletarskaia Kultura  2  Methods of Labour and Methods of Perception  3  The First Conference of Proletkult  4  Elements of Proletarian Culture  5  The Proletarian University  6  The Workers’ Encyclopaedia  7  International Proletkult
14 The Final Decade  1  Bogdanov’s Influence  2  Oppositions  3  Lenin’s Offensive against Bogdanov  4  Bogdanov’s Arrest  5  The Communist Academy  6  Blood Transfusion  7  The Struggle for Viability  8  A Martyr to Science  9  Obituaries
Conclusion: Bogdanov in Retrospect
Bibliography Index
All interested in the history of Russia and the Soviet Union as well as the history of Marxism and Marxist philosophy and economics.