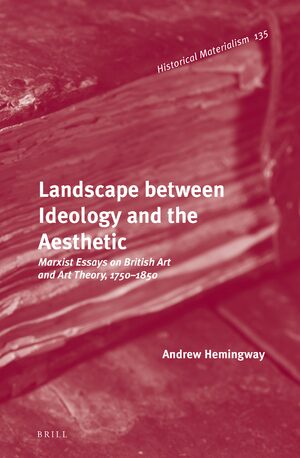 Landscape between Ideology and the Aesthetic

Author: Andrew Hemingway
At a time of growing interest in relations between Marxism and Romanticism, Andrew Hemingway’s essays on British art and art theory reopen the question of Romantic painting’s ideological functions and, in some cases, its critical purchase. Half the volume exposes the voices of competing class interests in aesthetics and art theory in the tumultuous years of British history between the American Revolution and the 1832 Parliamentary Reform Act. Half offers new perspectives on works by some of the most important landscape painters of the time: John Constable, J.M.W. Turner, John Crome, and John Sell Cotman. Four essays are hitherto unpublished, and the remainder have been updated and in several cases substantially rewritten for this volume.
E-Book (PDF)

€184.00$221.00
​
Add to Cart
Andrew Hemingway is Emeritus Professor in History of Art at University College London. His books include Landscape Imagery and Urban Culture in Early Nineteenth-Century Britain (Cambridge University Press, 1992) and The Mysticism of Money: Precisionist Painting and Machine Age America (Periscope Publishing, 2013).
"... the book has to be recommended not only as an impressive work of art historical rigour, but also as a timely reminder within the current conjecture that the stakes of Marxist art history not only concern which class controls the proper names of history, but whether our understanding of our own history, art and culture, and the class basis of them, is rational or ideological." - Richard Hudson-Miles, in: Marx & Philosophy Review of Books "This remarkable book on the complex, contradictory relations between aesthetics, politics and the art of landscape painting in the eighteenth and nineteenth centuries is the product of more than three decades' patient, perceptive thinking about their constellation. Its probing, historically nuanced interpretations of individual canvases and their ideological accretions are as elegant as they are rigorous; and its ongoing attempt to map the theoretical and political contours of Marxist theories of art and aesthetics, to which it represents a signal contribution itself, is commanding. Landscape between Ideology and the Aesthetic is a fascinating as well as fitting testament to Andrew Hemingway's influential career as an unapologetically Marxist art historian." – Matthew Beaumont, Professor of Nineteenth-Century Literature, University College London

"Andrew Hemingway’s collection of essays on eighteenth-century aesthetics and Romantic landscape painting, written over many years, demonstrates vividly the contribution that Marxism has made to both subjects. The essays on Cotman, Crome, Constable and Turner are filled with powerful insights and provide richly persuasive interpretations of classic works by placing them within a cogent intellectual framework that involves astute readings of their historical and literary context." – David Bindman, Emeritus Professor of the History of Art, University College London

"This exceptionally fine study offers a nuanced and profound historical analysis of varieties of late eighteenth- and early nineteenth-century British art. Wearing his learning lightly, Hemingway integrates the finest detail of close empirical research into an enjoyably readable narrative. He demonstrates conclusively how a critically-sophisticated Marxist approach opens up extraordinarily rewarding insights into a cultural history where the pictorial interplayed with the economic, literary, and political. He offers as outstanding an account of the ideas of the eighteenth-century Scottish philosophers as of the Norwich painters and along the way resoundingly demonstrates quite how much of actual value is to be had from the disciplined and multidisciplinary interrogation of historical art. One of the leaders of that group of scholars which reinvigorated the study of British historical art in the 1980s, Andrew Hemingway invites younger scholars now to take up the scholarly baton." – Michael Rosenthal, Emeritus Professor of the History of Art, University of Warwick
List of Illustrations ... vii
Acknowledgements ... xi
Sources and Occasions ... xii

1 The Science of Taste in the Eighteenth Century: Philosophical Criticism and the Scottish Historical School ... 41
2 Academic Theory versus Association Aesthetics: The Ideological Forms of a Conflict of Interests in the Early Nineteenth Century ... 86
3 Bourgeois Critiques of the Monopoly of Taste ... 114
4 Genius, Gender, and Progress: Benthamism and the Arts in the 1820s ... 150
5 Cultural Philanthropy and the Invention of the Norwich School ... 181

6 Meaning in Cotman’s Norfolk Subjects ... 217
7 Sheep as a Pictorial Motif: Pastoral and Counter-Pastoral ... 246
8 Artisanal Worldview in the Paintings of John Crome ... 297
9 John Crome’s ‘Local Scenery’: Iconography and the Ideology of the Picturesque ... 336
10 Constable and his Audience: An Argument for Iconography ... 387
11 The Field of Waterloo Exposed: Turner, Byron, and the Politics of Reaction ... 420

Coda: Regarding Art History ... 459
Bibliography ... 464
Index ... 492
Anyone interested in Romanticism, Marxist cultural theory and history of art. Primarily for a readership of academics and graduate students, it should be accessible to undergraduates and educated laypeople.