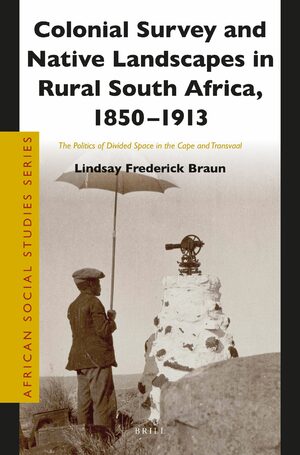 The Politics of Divided Space in the Cape and Transvaal

Author: Lindsay F. Braun
In Colonial Survey and Native Landscapes in Rural South Africa, 1850 - 1913, Lindsay Frederick Braun explores the technical processes and struggles surrounding the creation and maintenance of boundaries and spaces in South Africa in the nineteenth and early twentieth centuries. The precision of surveyors and other colonial technicians lent these enterprises an illusion of irreproachable objectivity and authority, even though the reality was far messier.

Using a wide range of archival and printed materials from survey departments, repositories, and libraries, the author presents two distinct episodes of struggle over lands and livelihoods, one from the Eastern Cape and one from the former northern Transvaal. These cases expose the contingencies, contests, and negotiations that fundamentally shaped these changing South African landscapes.

€75.00$97.00
​
Add to Cart
Lindsay Frederick Braun, Ph.D. (Rutgers, 2008), is Assistant Professor of History at the University of Oregon. His work on colonial southern Africa has appeared in a number of publications, including the South African Historical Journal and the Journal of Southern African Studies.

'Braun (Univ. of Oregon) examines the role of surveyors and cartographers in remaking the landscape of rural South Africa between the 1850s and the Natives Land Act (1913). Analyzing the complex and multivalent lenses through which Africans understood, responded to, and resisted these imagined and physical alterations to the landscape, Braun seeks to recover the participation of Africans in these processes without reducing or simplifying their motivations and worldviews to “communalism.”

'Lindsay Frederick Braun’s outstanding book makes a significant contribution to South African history. He enters the later part of the nineteenth century through the unusual portals of surveying and cartography; drawing on many neglected and underutilized sources'.

'Colonial Survey and Native Landscapes adds an important, hitherto missing dimension to South African historiography – the history of surveying, an important cog in the establishment of colonial power. It will sit proudly beside such works as Colin Murray’s Black Mountain (1992) for close attention to landscape'.

“Braun’s book is an unconventional social and political history of two rural areas in South Africa narrated along the lines of the colonial constitution of a seemingly hegemonic cadastral landscape. … [It] contributes to a history of cartography beyond positivism. Particularly commendable is his inclusion of maps that remained pure fantasy, given that they depict a territorial order that was never implemented. It reminds historians of the need to treat geographical archives with the utmost care and remain sceptical of maps as privileged archival objects.”

1. Introduction: The Construction of Colonial Terrritory

PART I: Imagining Lands without Chiefs
2. Redefining Land and Location in the Eastern Cape
3. “Cut Into Little Bits”: Engineering Social Order
4. Survey and Mediation in Fingoland

PART II: Locating the Enduring Kingdom
5. The Notional Republic
6. “Before, the Entire Land Was Ramabulana”
7. The Fall and Rise of Mphephu

8. Objections and Objectives: SANAC, the Tsewu Case, and the Land Act
Bibliography
Index

Anyone interested in rural South Africa during the late nineteenth century, especially the Transkei or Transvaal, or the history of geography and survey relative to colonial states generally.