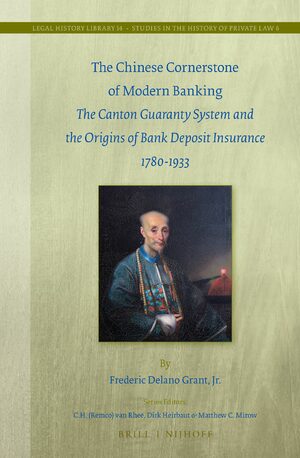 The Chinese Cornerstone of Modern Banking

€145.00$179.00
​
Add to Cart
Frederic Delano Grant, Jr., J.D. (1983), Boston College Law School, and Ph.D. (2012), Leiden University, is a Boston, Massachusetts lawyer who has written extensively about the business and legal history of China’s maritime foreign trade.
“As the United States and China are today inextricably interlocked in trade and investment, so too are their legal systems. This makes knowledge of the origins of this world-shaping economic cooperation, and the roles of law in its development, more important than ever. Frederic Grant’s well-researched and interesting book sheds new light on all of this and China’s previously-unknown influence on American business law in the nineteenth century.”
Jerome Alan Cohen, Professor of Law, New York University School of Law

A "piece of masterly detective work on how ideas travel over time and space, become adopted successfully in a different place, and then come back to where they started."
Andrew Sheng, Distinguished Fellow of the Fung Global Institute, Chief Advisor to the China Banking Regulatory Commission, former Deputy Chief Executive of the Hong Kong Monetary Authority

“This is both a pioneering and a path-breaking study. Crossing national as well as disciplinary borders, it traces bank deposit insurance, the cornerstone of efforts to secure the stability of modern banking systems worldwide, to its origins in a government mandated private guarantee fund set up by the Cantonese hong merchants before 1800. Although that fund eventually failed due to moral hazard and other all too familiar problems, it had already become famous for its effectiveness, and was taken as the inspiration for banking reform in the United States. Using evidence from records of Western traders and North American law case records, and drawing on the author's rich experience as a lawyer and legal historian, this book shows the self-confidently global activity of these Chinese merchants and trade financiers. This is a substantial and innovative contribution to the global history of economic and legal institutions.”
Rudolf Wagner, Senior Professor, Institute of Chinese Studies, Heidelberg University.

Bibliography ... 315
Index ... 333
Those interested in legal history (American and Chinese), Chinese history (Qing period), business history (American and Chinese), banking history (American) and the history of bank deposit insurance (American and Worldwide).
• Traces modern bank deposit insurance to its historical inspiration -- a private guaranty fund, operated under the supervision of the Chinese government, whose insolvency was one of the causes of the Opium War.
• First study of the guaranty program enforced by the Qing government among the hong merchants of Canton (Guangzhou), China, and of the Canton System itself as a distinctly Chinese regulatory system.
• Draws parallels between the Canton Guaranty System of 1780-1842 and modern financial guaranty schemes, including failures to properly assess and reserve for risk contingencies, failures to enforce laws designed to avoid risk -- and too big to fail, "with Chinese characteristics."