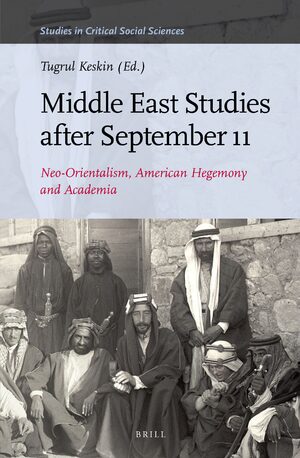 Editor: Tugrul Keskin
Middle East Studies after September 11: Neo-Orientalism, American Hegemony and Academia will show the long-term implications of current approaches to Middle East scholarship on the internal transformation of Middle Eastern societies. It describes the complex relationship between American academia and state government: a relationship which has influenced and restructured the state, society and politics in the Middle East as well as in the United States. It engages the disciplines of Sociology, Political Science, Anthropology, History and International Studies, while maintaining the epistemological, methodological, and ontological insights of a sociological approach to the Middle East.

€119.00$137.00
​
Add to Cart
Tugrul Keskin, Ph.D. (2009), Virginia Tech, is an Associate Professor at Shanghai University. He is the founder and moderator of the Sociology of Islam listserve, the founder and editor of the journal Sociology of Islam (Brill) and the Middle East and North Africa regional editor for the journal Critical Sociology (Sage).
Acknowledgements
List of Illustrations
Note on Contributors

1 An Introduction: The Sociology of Orientalism and Neo-Orientalism (Theories and Praxis)
Tugrul Keskin

2 At the Threshold of Iranian Studies
Babak Elahi

3 A Genealogy of Orientalism in Afghanistan: The Colonial Image Lineage
Shah Mahmoud Hanifi

6 The Onto-Politics of Moderation: Studying Islamist Politics and Democracy in the Middle East
Dunya D. Cakir

8 Let the Oriental Perform: A Critical Approach to Neo-Orientalism at Work in Turkish Politics
Merve Kavakci

11 The Jasmine in the Fist: The Otpor Model in the Arab Spring and Beyond
Emanuela C. Del Re

All interested in the history, politics and sociology of the Modern Middle East, Area Studies, and anyone concerned with Orientalism and Neo-Orientalism on that theme.