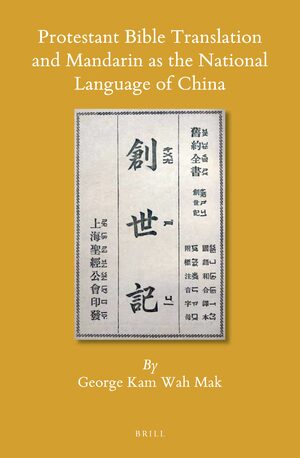 Protestant Bible Translation and Mandarin as the National Language of China

Series:  Sinica Leidensia, Volume: 131
Author: George Kam Wah Mak
This book represents the first monograph-length study of the relationship between Protestant Bible translation and the development of Mandarin from a lingua franca into the national language of China. Drawing on both published and unpublished sources, this book looks into the translation, publication, circulation and use of the Mandarin Bible in late Qing and Republican China, and sets out how the Mandarin Bible contributed to the standardization and enrichment of Mandarin. It also illustrates that the Mandarin Union Version, published in 1919, was involved in promoting Mandarin as not only the standard medium of communication but also a marker of national identity among the Chinese people, thus playing a role in the nation-building of modern China.
E-Book (PDF)

'This volume is a welcome, well-researched addition to our understanding of the relationship between the translation of the Bible and the promotion of Mandarin as the national language of China during the late Qing and Republican periods. ...highly recommended.'
Reviewed by STUART VOGEL, Auckland, NZJAS 19,2 (2017)

'This book has an extensive bibliography (38 pages), an index of Biblical verses, and a general index. Overall, this is a well-researched monograph, exploring the impact of Mandarin Bibles published from 1856 to 1919.'
T. Timothy Chen, Mid-America Baptist Theological Seminary west North America, Memphis, TN, American Journal of Chinese Studies (25/1) 2018

'George Kam Wah Mak makes a convincing case that Chinese translations of the Bible enriched and helped standardize Mandarin as China's national language in the Republican Period (1912-1949).(...) George's Mak work is a significant contribution to the study of the modern Chinese language as well as the history of Chinese Protestantism and its relationship to Chinese culture.'
Robert Entenmann, Church History, 88/1 (2019).

'...his argument is sophisticated and compelling. It is worth our attention.Mak's work not only challenges our current understanding but also encourages us to rethink the dialectic relationship between Christianity and China's nation-building.'
John Feng, JRAS, Series 3 (2019)

'George Kam Wah Mak has taken up the admirable job where so many previous researchers into the history of the Chinese Bible have stopped by exploring how the great Chinese Bible, the Union Version, has influenced the development of the modern Chinese language. (...) overall, this book provides the long-awaited next stepping stone in the history of the Union Version, leading us to a better understanding of the undoubtedly great and lasting influence of one of the great Bible translations in the history of Christianity.' Jost Zetzsche, Journal of Ecclesiastical History, 70/2 (2019)
Acknowledgments
List of Figures and Tables
List of Abbreviations
Conventions


For those interested in modern Chinese history, the Chinese language, Bible translation, Christianity in China, the history of Protestant missions, and the relationship between the Bible and national languages