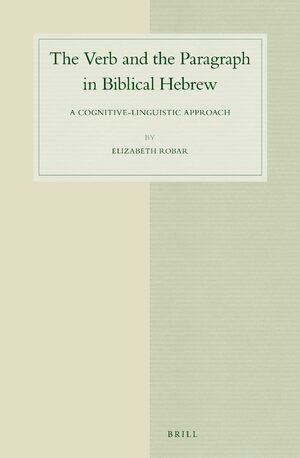 The Verb and the Paragraph in Biblical Hebrew

著者： Elizabeth Robar
"Research on the function and semantics of the verbal system in Hebrew (and Semitics in general) has been in constant ferment since McFall’s 1982 work The Enigma of the Hebrew Verbal System. Elizabeth Robar's analysis provides the best solution to this point, combining cognitive linguistics, cross-linguistics, diachronic and synchronic analysis. Her solution is brilliant, innovative, and supremely satisfying in interpreting all the data with great explanatory power. Let us hope this research will be quickly implemented in grammars of Hebrew."

In The Verb and the Paragraph in Biblical Hebrew, Elizabeth Robar employs cognitive linguistics to unravel the notorious grammatical quandary in biblical Hebrew: explaining the waw consecutive, as well as other poorly understood verbal forms (e.g. with paragogic suffixes).

She explains that languages must communicate the shape of thought units: including the prototypical paragraph, with its beginning, middle and ending; and its message. She demonstrates how the waw consecutive is both simpler and more nuanced than often argued. It neither foregrounds nor is a preterite, but it enables highly embedded textual structures. She also shows how allegedly anomalous forms may be used for thematic purposes, guiding the reader to the author’s intended interpretation for the text as it stands.

From  € 124.00$ 152.00
​
加入购物车
Elizabeth Robar, Ph.D. (2013), University of Cambridge, is Junior Research Fellow in Semitic Languages at Tyndale House, Cambridge, England. She has published multiple articles on biblical Hebrew, particularly challenges raised by modern linguistics to traditional philology.
All interested in biblical Hebrew, particularly the verbal system and pragmatics or discourse analysis, as well as any with a linguistic interest in information structure higher than the clause.