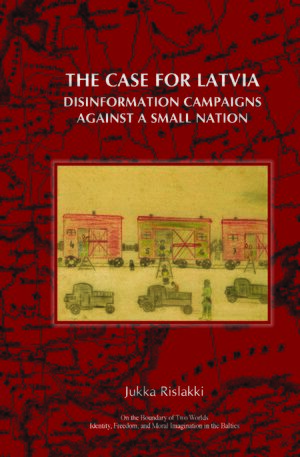 The Case for Latvia. Disinformation Campaigns Against a Small Nation

Fourteen Hard Questions and Straight Answers about a Baltic Country

Author: Jukka Rislakki
What do we know about Latvia and the Latvians? A Baltic (not Balkan) nation that emerged from fifty years under the Soviet Union – interrupted by a brief but brutal Nazi-German occupation and a devastating war – now a member of the European Union and NATO. Yes, but what else? Relentless accusations keep appearing, especially in Russian media, often repeated in the West: “Latvian soldiers single-handedly saved Lenin’s revolution in 1917”, “Latvians killed Tsar Nikolai II and the Royal family”, “Latvia was a thoroughly anti-Semitic country and Latvians started killing Jews even before the Germans arrived in 1941”, “Nazi revival is rampant in today's Latvia”, “The Russian minority is persecuted in Latvia. . .” True, false or in-between? The Finnish journalist and author Jukka Rislakki examines charges like these and provides an outline of Latvia's recent history while attempting to separate documented historical fact from misinformation and deliberate disinformation. His analysis helps to explain why the Baltic States (population 7 million) consistently top the enemy lists in public opinion polls of Russia (143 million). His knowledge of the Baltic languages allows him to make use of local sources and up-to-date historical research. He is a former Baltic States correspondent for Finland's largest daily newspaper Helsingin Sanomat and the author of several books on Finnish and Latvian history. As a neutral, experienced and often critical observer, Rislakki is uniquely qualified for the task of separating truth from fiction.
E-Book

€29.00$35.00
​
Add to Cart
”The best book written on Latvia by a foreigner: incisive, well-informed, and persuasive” – Edward Lucas, Senior Editor The Economist
“Rislakki’s consultants include some of the best US and Baltic scholars; consequently, his well-footnoted accounts are reliable … Recommended.” in: CHOICE, Vol. 46, No. 10, June 2009
“a spirited defense of Latvia … [Rislakki has an] extensive knowledge of the language, the people and their history … well written … The book is important, as it can be taken as a starting point for discussions of how misinformation and disinformation are used to construct a coherent negative image of a country thus creating an instrument of power in a globalized and digitalized world. In many respects it is an eye-opener and quite scary that the reputation of a country and its inhabitants can be tainted with such ease.” in: Journal of Baltic Studies, Vol. 40, No. 3, September 2009
“Rislakki is a real chronicler of history and also a live witness of events. This book is an excellent opportunity for a Western readership to get to know Latvia’s history and present. … Europa mus nesupratis [Europe will not understand us] - this is the main chorus of a popular song on Latvian Radio in 2004, which is the opening sentence of the book. Let us hope that this study will decrease this lack of understanding of Latvia among Europeans.” in: Kulturos barai [Domains of Culture], the monthly journal of culture and art, Lithuania No. 11, 2008
“This book is an excellent study of how a country with a size of a flea became Russia’s enemy number one. [--] Rislakki explains against the historical background the reasons for Russia’s negative attitude. [--] This propaganda has sunk well in the international audience.” – Sofi Oksanen, Finnish Novelist
“A popular book taking up the country’s defense is the Latvian translation of a review by a Finnish journalist of fourteen major questions that are prominent in Latvian-Russian relations (Rislakki 2008). It is widely perceived as a much needed and the best known defense to frequent Russian charges of discrimination and issues related to Latvian and Russian security” in: Problems of Post-Communism, May 2009, a paper by Gundar J. King and David E. McNabb
“They [Rislakki’s themes] show concretely, that knowing history, especially the history of 20th century and the debate about it, is indispensable for anybody wanting to understand todays controversies and problems of Latvia, as well as of Estonia and Lithuania.” – Professor Seppo Zetterberg, University of Jyvaskyla
“This book is an outstanding basic work for anybody interested in Latvia – or the Baltic countries in general.” – Jarre Parkatti and Johanna Virkkula, Idantutkimus [Eastern Studies], 2008
Prologue
Misinformation, disinformation?
Questions and Answers
1. Are minorities, especially the Russians, discriminated against in Latvia? Is it very difficult for them to become citizens? Do they have political rights?
2. Are the Russians denied the right to use their language in Latvian society and in the schools?
3. Were the Baltic lands a small, underdeveloped province in a far corner of Europe, to which Germans, Swedes, Poles, and Russians brought religion, culture, and well-being and where no prerequisites for independence existed?
4. Did Latvia Reds help Lenin seize power in Russia? Did they help murder the Russian royal family?
5. Was Latvia granted independence as a present? Was the war of Independence an exaggerated myth? Was it a series of monor skirmishes that the Latvians were able to win with foreign help?
6. Why did the Latvians not resist the Soviet army’s taking over their country in 1940? Did the people carry out an anti-bourgeois, anti-fascist revolution, after which Latvia joined the legally, by means of elections?
7. Did Latvians murder their Jews in 1941? How anti-Semitic is and was Latvia?
8. Why did tens of thousands of Latvian volunteers fight in the SS troops, and why are SS veterans still allowed to march on the streets of Riga instead of being brought to justice?
9. Did the Soviet Union occupy Latvia? Were the Latvians victims of genocide?
10. Did the Latvians succumb to Soviet power, cooperate with the Communist authorities, and start their independence movement only after the Lithuanians and Estonians had begun theirs?
11. Has Lativia always belonged to Russia and benefited from it? Is it a strategically indispensable area for Russia?
12. Shouldn’t Latvia be grateful for factories, houses, schools, roads, and harbors built during the Soviet era? Shouldn’t she pay compensation as well?
13. Has Latvia been unwilling to establish good relations with neighboring Russia? Does Latvia champion an intransigent, hostile line toward Russia in the European Union, and did she decline a border agreement with Russia? Does she demand that Russia hand over some border areas to her?
14. Have the new leaders of Latvia privatized state property for their own use and are they guilty of massive corruption while the majority of the people live in poverty?
Acknowledgements: How and Why This Book came to Be?
Basic Facts about Latvia
Notes
Bibliography
Index