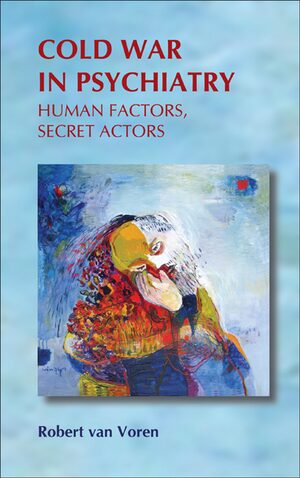 Author: Robert van Voren
For 20 years Soviet psychiatric abuse dominated the agenda of the World Psychiatric Association. It ended only after the Soviet Foreign Ministry intervened. Cold War in Psychiatry tells the full story for the first time and from inside, among others on basis of extensive reports by Stasi and KGB – who were the secret actors, what were the hidden factors? Based on a wealth of new evidence and documentation as well as interviews with many of the main actors, including leading Western psychiatrists, Soviet dissidents and Soviet and East German key figures, the book describes the issue in all its complexity and puts it in a broader context. In the book opposite sides find common ground and a common understanding of what actually happened.
E-Book

€54.00$68.00
​
Add to Cart
Robert van Voren (1959), a Sovietologist by education, has been a human rights activist since 1977 with a special interest in mental health issues. He is Chief Executive of the Global Initiative on Psychiatry (GIP) and has written extensively on Soviet issues and, in particular, issues related to mental health and human rights, and published a dozen books. His memoirs, On Dissidents and Madness, were published by Rodopi in 2009.
"this is a highly detailed account of a still incompletely understood chapter in Cold war and psychiatric history. As such it should be of interest to scholars working on those topics." – in: The Russian Review 70/4 (October 2011)
"The use of psychiatry to silence political dissenters was undoubtedly one of the most pernicious sides of the Soviet regime. No wonder that the leaders of perestroika believed that stopping this criminal practice was one of the most urgent priorities. Robert van Voren’s book is the very first full investigation of this problem. I highly recommend this book." – Anatoly Adamishin, former Deputy Minister of Foreign Affairs of the USSR
"Robert van Voren writes history in an innovative, effective, and vivid way. He weaves into the story of Western responses to the abuse of psychiatry in the USSR his probingly personal interviews with key players. Apart from presenting a skillfully interwoven succession of personal and institutional dramas, this book will also be valuable to students of the varied ways in which international professional bodies succeed or fail at upholding ethical standards of behavior by their members. In sum, this fast-paced and readable book combines the fruits of painstaking archival research with episodes of high-voltage human interest. It’s hard to put down." – Peter Reddaway, Professor Emeritus of Political Science, George Washington University
Leonidas Donskis: Foreword
Introduction
Part 1: Setting the Stage
Meeting Mel Sabshin
Melvin Sabshin’s Roots
From Russia to the Statue of Liberty
Meeting Jochen Neumann
Growing up in Post-War Germany
Shaken Foundations
Political Turmoil at Tulane University
The Formation of a Communist
Part 2: The Curtain Opens
Origins of Soviet Political Psychiatry
Meeting Ellen Mercer
The Shield and Sword of the Party
Opposition at Home and Abroad
A Secret Actor
The End of the Working Commission
Part 3: Act One
The WPA Becomes Involved 1977-1983
The Soviets Leave the WPA
Another Hidden Factor
Meeting Costas Stefanis
Soviet Actors
Secret Negotiations?
A Professional Career with Political Hurdles
Reporting for the DDR Leadership
Part 4: Act Two
Power Struggle in Moscow
Political Changes at Home
Irritation, Admiration and Disenchantment
Psychiatric Abuse and East-West Politics
The US Visit to the USSR
Granada
Part 5: The Final Act
Athens
Part 6: The Curtains Close
Aftermath
Siegerjustiz and its consequences
Victors and Losers
Part 7: Conclusion
Lessons Learned. Any Lessons Learned?
Post Scriptum
List of Abbreviations
Bibliography
Index of Names
Index of Subjects